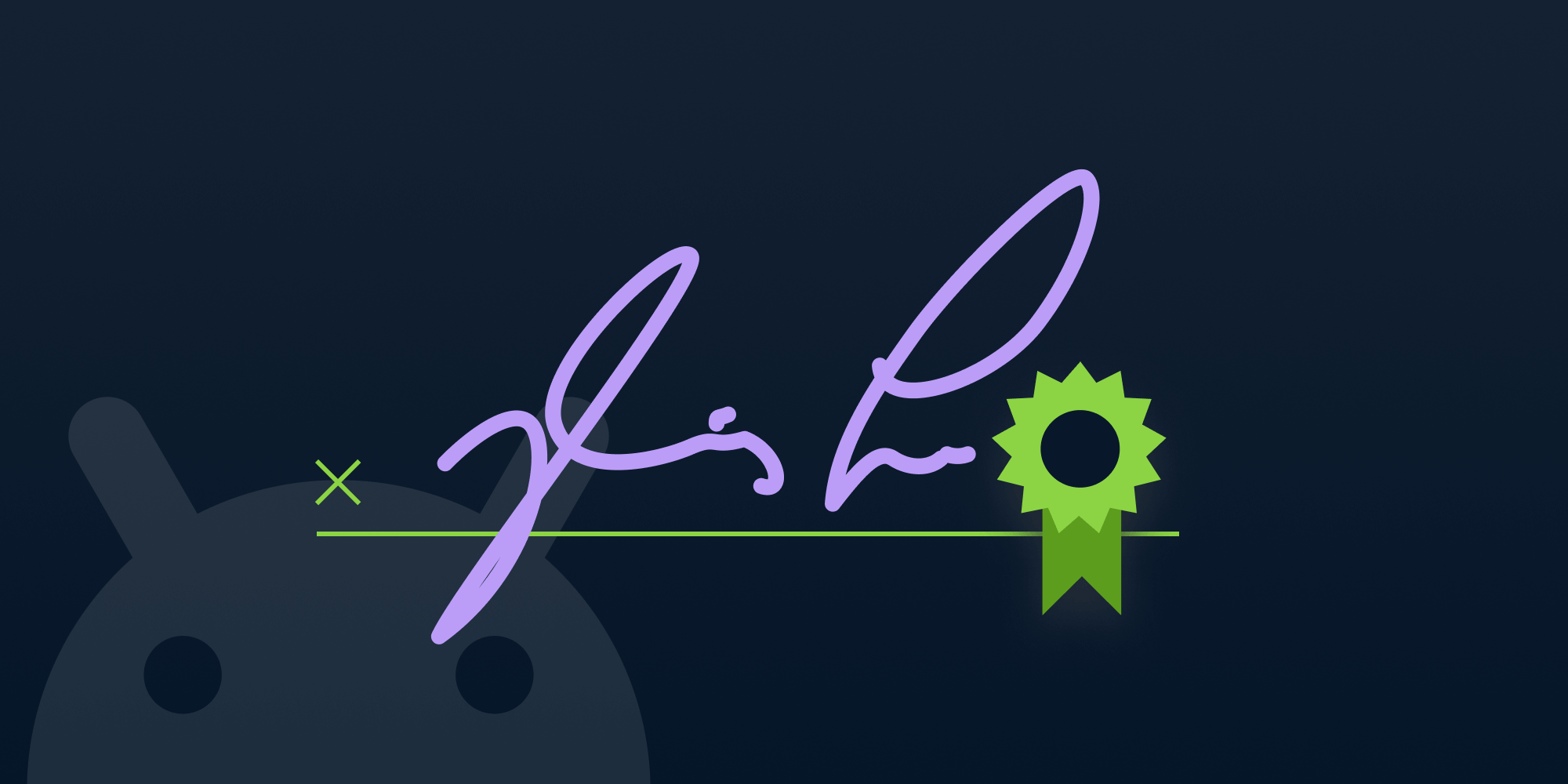 Android Development How To Security PDF

We’ve talked about digital signatures on our blog in the past, but today we’ll revisit this topic once more with special attention given to the Android side of things.

Here’s a quick reminder of what a digital signature is in the context of a PDF:

If you want more in-depth knowledge about the signing part, you’ll find that information here.

With that out of the way, let’s look at the signing options on Android:

The above options can be split into two sub categories, which are outlined below.

Both Pkcs12Signer and MemorySigner let PSPDFKit do the heavy lifting of creating a signature. All your application has to provide is the private key. These signing options are great if you can use them, but they don’t allow a lot of flexibility if you require the use of an external signing service, or if you want to include signature features that aren’t yet supported — like the addition of a signed timestamp, or making the signature long-term validation (LTV) compatible by embedding the whole certificate chain needed for validation.

The ContainedSignaturesSigner encapsulates the contained signature creation process, which is split into three steps:

Now that we know the available options, let’s look at putting this to use. The simple signature creation scenario is already documented well in our Digital Signatures guide, so let’s take this opportunity to look more closely at the contained signature creation.

As discussed before, the contained signature creation is split into three parts. Let’s now take a closer look at each of them.

Before we can do anything else, we need to prepare the document. If you’re using the ContainedSignaturesSigner, this is abstracted away from you, but we also expose all the parts required for you to prepare the document manually. The main method we use here is Signer#prepareFormFieldForSigningAsync(). Let’s try writing our own Signer to see how this works:

This takes care of the first step. We now have a PDF ready to be digitally signed. Note that we used BlankSignatureContents since we need to zero out the area where the signature will be placed before we can sign it.

Now that everything is ready, we can move on to the next step: actually creating a digital signature. Depending on your exact requirements, doing this ranges from fairly simple all the way to quite complicated. For now though, let’s get some of the boilerplate work out of the way and implement our prepareSignature() method:

Equipped with all this new knowledge, it’s time for the final piece: embedding the signature.

We already had the following piece of code in the first code block, so let’s go over what happens when this is called:

Essentially what happens is we tell PSPDFKit that we now have everything, and then internally, we prepare the signature dictionary that’s written to the PDF. This dictionary includes information like the version of PSPDFKit that was used for signing, which OS was used for signing, and important metadata such as what format the signature has. Finally, we call SignatureContents#signData() with the exact bytes covered by the signature so it can be properly signed, and we embed that return value.

Now we have a digitally signed document.

Where to Go from Here

This post covered how our ContainedSignaturesSigner looks from the inside and hopefully gave you a better idea of how digital signatures work in general. If you want to know how to use the new Signer we built, look no further than our Contained Signatures Example. Digital signatures are a complicated topic, so we hope this look under the hood gave you a better idea of how they work and where to use them.

How Updating to Kotlin 1.4 Broke Our Linter Rules