Swift Package Manager is a built-in Xcode tool for managing and distributing third-party dependencies. It recently gained the ability to distribute binary frameworks as Swift packages, which enabled us to offer PSPDFKit 10 for iOS as a Swift package.

In the next section, we’ll see how we integrated the PSPDFKit binary package into a simple sample project. So let’s get started!

Integrating a Binary Swift Package into Your Project

Adding a binary Swift package into your project can be done directly in Xcode in a few simple steps: 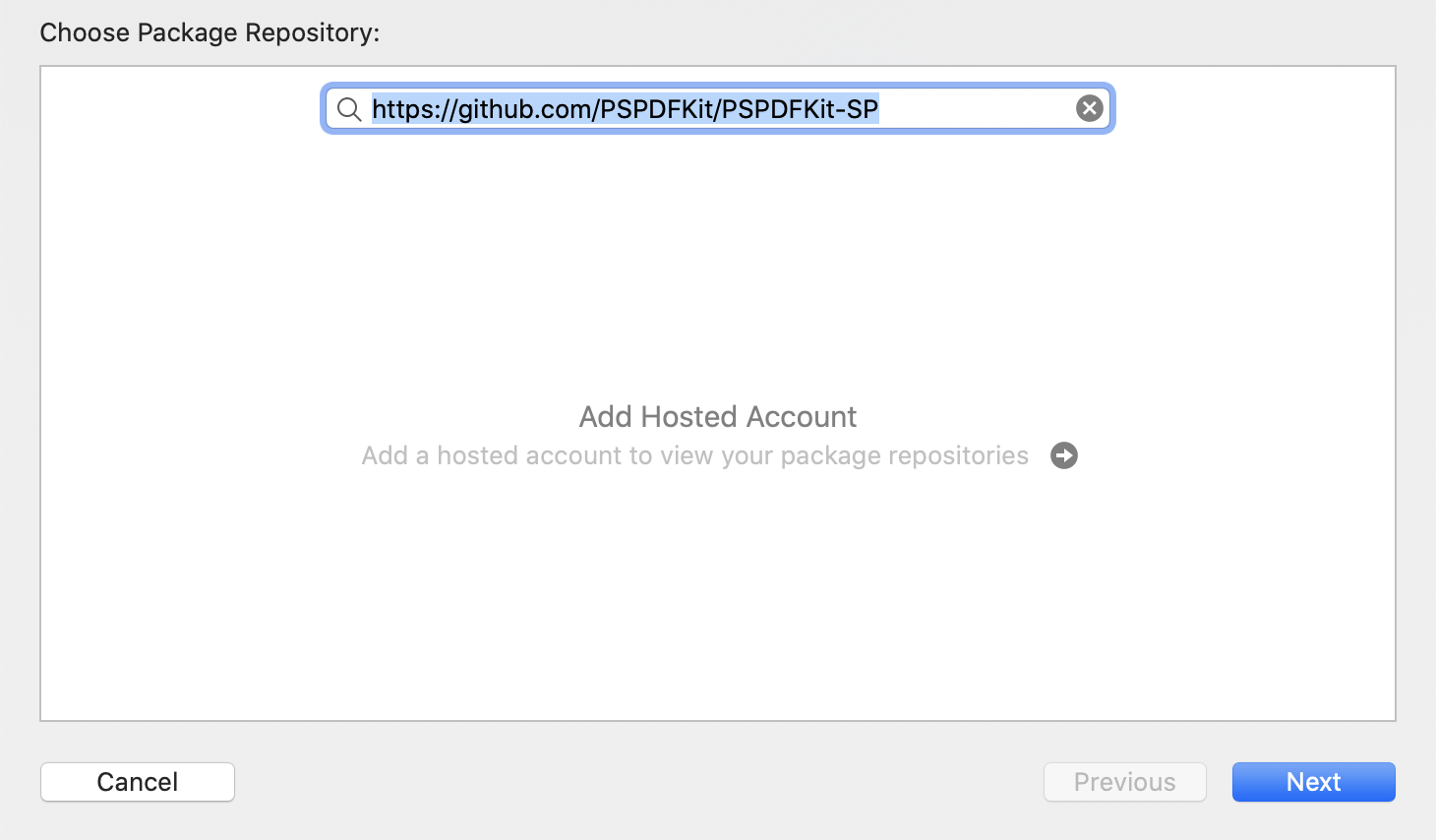 You can integrate the PSPDFKit Swift package into your app, or you can download our sample project here to experiment.

Now that we’ve shown how to add a binary Swift package to a sample project, let’s see how we can build and distribute it.

How to Build and Distribute a Binary Swift Package

To create a binary Swift package, you need Xcode 12 and the binary framework you want to distribute. In this section, we’ll go over how we created the Swift package for both PSPDFKit.xcframework and PSPDFKitUI.xcframework.

Binary Swift packages only support the XCFramework format, and fortunately for us, PSPDFKit was already distributed as an XCFramework for the manual and CocoaPods integrations.

To learn more about XCFrameworks and how to build them, please refer to our Supporting XCFrameworks blog post.

Creating a Swift Package in Xcode

A Swift package consists of the manifest file (Package.swift), source code, binaries, and resource files. In our case — for the PSPDFKit Swift package — we only need the manifest, README files, and our binary frameworks.

First, we create the new Swift package in Xcode (File > New > Swift Package…), which will create a folder that has a structure similar to a regular Xcode project.

Then, we need to configure our manifest file like so:

Now, let’s discuss the key aspects of the snippet above.

The comment at the top of the file is important because the Swift tool version represents the minimum version of Swift required to use the package.

The package name represents the name of your package library, and it doesn’t necessarily need to match your binary framework’s name or its module name.

The package’s products property describes the library that will be added to your Xcode project. In this case, we’re adding the PSPDFKit library, which has two targets for each of the PSPDFKit XCFrameworks: PSPDFKit and PSPDFKitUI. The target’s name needs to match the framework’s module name.

The targets property is an array that defines the Swift package binaries.

We create a binaryTarget by specifying once again the module name of each binary framework, the HTTPS download URL from which Swift Package Manager will download the binary, and the checksum.

Binary Swift packages require the checksum for security purposes. Xcode will verify that the downloaded binary is the same one the vendor intended to bundle. To get the checksum of our binary frameworks, we use the swift package compute-checksum command like so:

Xcode expects Swift packages to be hosted and distributed as git repositories. We’re hosting our Swift packages for PSPDFKit, Instant, and PSPDFKitOCR on GitHub, and you can add them to your project using the URLs below.

How Does Swift Package Manager Compare to Other Dependency Managers?

Over the years, the iOS community has benefited from Carthage and CocoaPods. Swift Package Manager is the newest dependency manager for iOS developers, and it’s not as widely used as CocoaPods and Carthage. It also lacks certain features like CocoaPods’ subspecs and resource handling, to name a few.

For example, the main limitation Swift Package Manager has for our use case compared to CocoaPods is the ability to conditionally include resources (FB7787327). As a result, our customers have to manually integrate the desired language bundles. In CocoaPods, this can be easily achieved via subspecs.

Even though Swift Package Manager is open source, it’s harder to submit and discuss issues, especially if they’re related to the Xcode UI. It’s advantageous to use a fully open source dependency manager like CocoaPods or Carthage because you’ll be able to contribute and add new features. We at PSPDFKit have benefited from this, and in turn, we made the decision to sponsor CocoaPods.

Swift Package Manager has many pros compared to Carthage and CococaPods. For example, it’s built directly into Xcode, so there’s no need to install any additional tools or make sure the entire team updates at the same time. It’s also less likely to break new versions of Xcode or iOS.