For most developers, Git is the go-to version control system for their software projects. At PSPDFKit, we host all our projects on GitHub, and many of them inside our monorepo, which currently counts about 50 active contributors. Our teams pride themselves on a clean commit history — not only on our main branch, but also inside the working branches maintained by individuals.

One particularly useful tool for keeping a clean commit history on a working branch is Git’s --interactive rebase option. Building on top of Git’s regular git rebase command, interactive rebasing allows users to modify single commits of the rebased branch by applying transformations such as commit renaming, reordering of all commits, removal of unwanted commits, merging of two or more commits into one, and more.

As an Android developer who likes to stay inside my preferred IDE as much as possible, I’m happy that Android Studio offers an easy-to-use integration of interactive rebasing that serves all my needs for commit housekeeping. Let’s look at how it works!

First, we’ll take a quick look at one of the many uses of interactive rebasing. Consider writing the following method in your Android app:

All great, and the tests are green too! 🙌 But, oh no! A typo slipped into the method name I just committed. Let’s fix it and create another commit:

Problem solved. But now the git log of my branch shows one of those dreaded “fix” commits:

To remove any signs of the embarrassing naming mistake I made, I’m going to rewrite the commits on my branch. Nothing easier than that! With Android Studio’s interactive rebase UI, I can use the fixup operation to merge my latter commit into the former. Here’s how it works:

The mindful Git user probably noticed that the demonstrated fix could have been done using git commit --amend as well. However, using interactive rebase, it’s possible to fix up much older commits too — rather than only the previously committed one — by simply dragging the fixup commit right after the target to fix up.

While not as renowned as Bigfoot, --autosquash is a very real Git option for rebasing — one that autoconfigures the interactive rebase dialog when using specific Git commit naming conventions.

Consider the previous example: With autosquash, instead of manually marking a commit as a fixup for another commit, it’s sufficient to start the fixup commit message with !fixup, followed by the message of the commit to fix up. For example:

After running git rebase --interactive --autosquash, Git will configure the rebase dialog the same way we did it manually before. 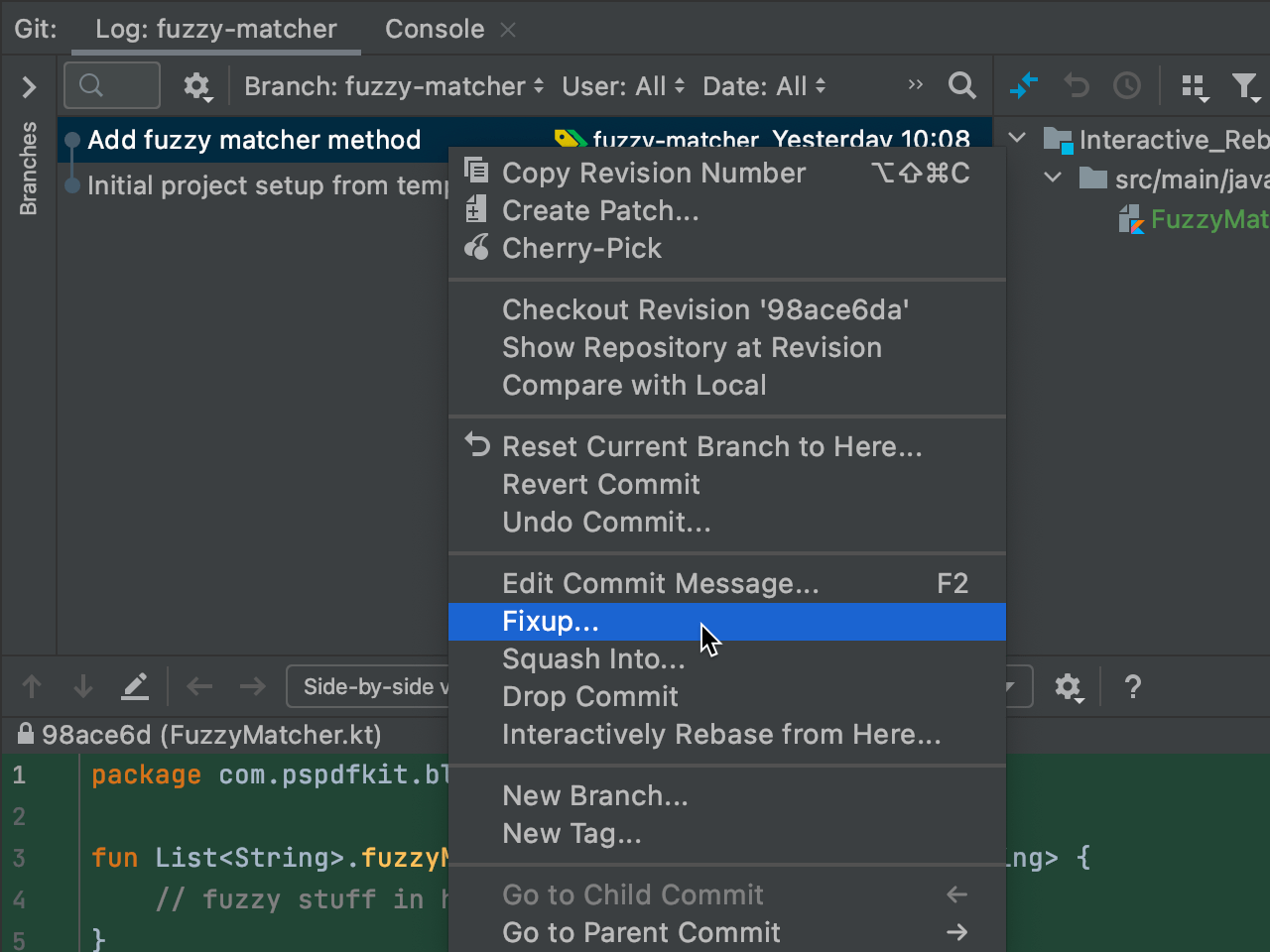 After that, you continue with interactive rebasing, as explained before.

It’s safe to enable this option, since Git will only ever autoconfigure your interactive rebase if there are commits prefixed with !fixup, !squash, or similar commands. (Check out Git’s --autosquash reference docs for the extensive list of commands.)