Android Debug Bridge (adb) is an indispensable tool in any Android developer’s toolbelt because it allows you to communicate with any Android device. This communication exists in the form of app installation, file transfer, access to debugging information such as logcat, and access to a Unix shell that supports variety of commands that can be run on the device. This article presents the basics of adb as well as a few advanced tricks.

adb is an application that consists of three components:

These components communicate via TCP/IP protocol. When you invoke the adb command, the client first checks to see if the adb server is already running. If not, the server is started. After starting, the server sets up connections to adbd daemons on all connected devices. Once the connection is started, you can use adb commands to control these devices.

adb is included in the Android SDK Platform-Tools package, which you can download with the SDK Manager. You can find it in android_sdk_directory/platform-tools/ after installation.

💡 Tip: If you don’t need/want the entire Android SDK ,you can also use the standalone SDK Platform Tools package to install adb.

adb can only be used with devices that have enabled USB debugging in the device’s Developer options.

The Developer options are hidden by default. You’ll need to go to About phone in Settings and tap on Build number seven times until the toast with the text “You are now a developer” is displayed. Developer options will be displayed in the System section of the Settings screen.

ℹ️ Note: Some devices use a custom Settings app and Developer options might be located in a different location or named differently.

Now, after connecting to your device, a system dialog with the computer’s RSA key fingerprint will pop up. Accepting this dialog enables the execution of adb commands on this device. This is a security measure to make sure that adb commands from an unknown computer cannot be executed unless explicitly allowed on the device.

You can verify that your device is connected to the adb server by invoking the device command, which lists all connected devices:

If your device is not listed, try reconnecting the device and restarting the adb server via the following:

💡 Tip: The kill-server command is generally useful for stopping the adb server when encountering issues such as when adb is not responding to a command or when it can’t connect to the device.

Transferring files to and from an Android device can be problematic for newcomers. The simplest solution is to transfer files using the Media Transfer Protocol (MTP). However, this approach is cumbersome, because every time you reconnect your device, you need to enable MTP to transfer files. 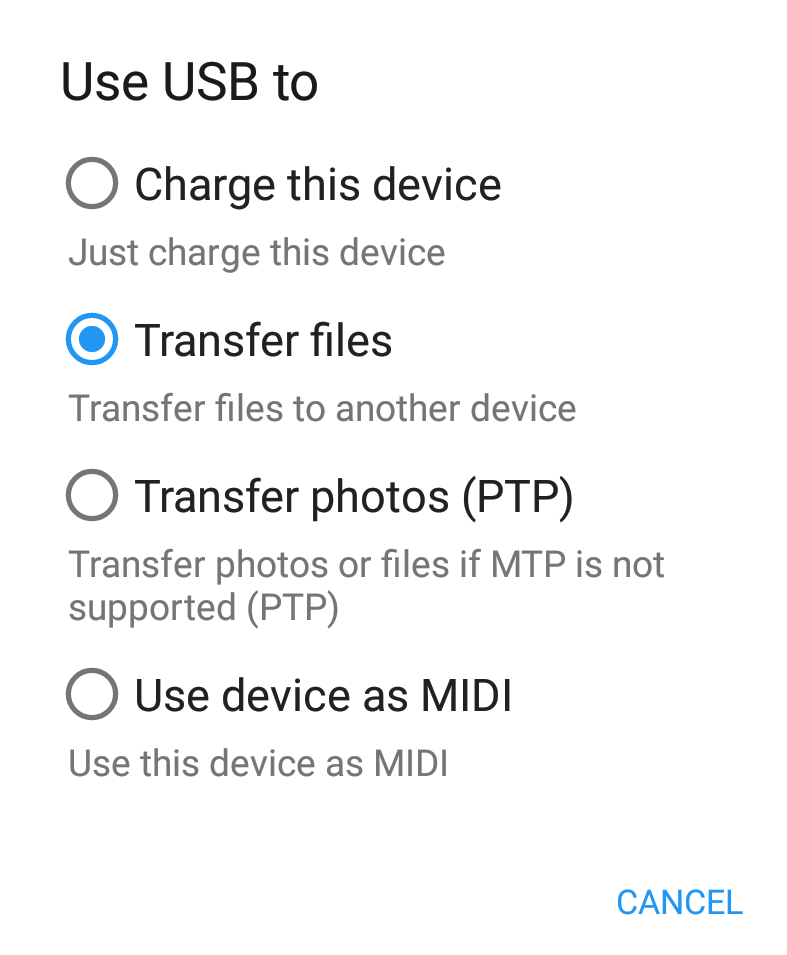 You can enter a remote shell on a device via the following:

💡 Tip: You can exit the remote shell by typing Ctrl + D or by typing exit.

You can also execute single shell commands via the following:

Android devices support most basic Unix shell commands such as ls, cat, cd, and rm. There are also a few commands for interacting with Android services. The most useful ones are:

💡 Tip: You can run these commands without any parameters to print their usage, i.e. adb shell am and adb shell pm.

adb can install and uninstall applications:

If an application is already installed on the device, you can copy its APK file by combining the result of a shell pm path command with the pull command. For example, to download PSPDFKit’s own PDF Viewer app, run:

This can be combined into a simple one-liner:

Android Studio provides the Logcat window, which supports the display of a device’s logcat. However, this is not usable when batch processing — for example, when archiving logs for failed builds on your CI.

Android devices ship with the logcat command available through adb shell logcat or via its alias adb logcat. Logcat dumps system and application log messages and prints them to the screen. Read more in logcat’s documentation.

I would like to quickly mention one additional tool that works around the limitations of the default logcat command — namely its inability to filter output by application package (logcat only supports filtering based on process IDs). PID Cat provides simple filtering for an application package together with enhanced formatting and coloring for the logcat messages:

Use the screencap shell command to capture device screenshots:

Alternatively, you can use the -p parameter to output PNG data directly to the standard output:

Use the screenrecord shell command to record screen activity:

💡 Tip: Use the screenrecord --help command to see a list of available options, including options for controlling recording resolution and bit rate.

To do this, you’ll need to know the serial number of the target device. You can get the serial by using the devices command:

Then use the -s option to specify the serial number of the target device:

You can use the forward command to forward requests on a host port to a different port on the device. This is usable if you want to connect to a server running on the device from your computer:

The reverse command can be used to set up port forwarding in an opposite direction, i.e. to forward requests on the device port to a different host port. This is usable if you want to connect to a server running on your computer from the device:

For example, we are developing an Android client for our backend. We already have a local backend instance running on our computer on port 5000. We can connect the device to the same network and connect using our computer’s IP address, but a simpler solution is to set up port forwarding on the device:

We can now connect to our backed running on the local computer via localhost:5000.

Connecting to a Device via Wi-Fi

So far, we’ve only assumed that adb connects to a device over USB, but you can also configure adb to work over Wi-Fi. The setup consists of multiple steps, outlined below.

You can now use adb commands remotely. Having a wireless adb connection is nice for decreasing your dependence on wires. The underlying TCP/IP transport is also super useful for building more advanced use cases. For example, you can tunnel adb connections on your CI server to your remote computer.

This blog post covered various topics related to adb usage, and I hope that the tips and tricks explained in this article will make you more productive and happy Android developer.