Back in 2019, I attended my first PSPDFKit retreat. I was still relatively “new” to the company, having only started working with everyone in the fall of 2017. But while it began as a daunting experience, I came out the other side feeling so much more connected to my colleagues and having a better understanding of how we all worked.

A year later, in February of 2020, PSPDFKit held — what we didn’t know at the time would end up being — the last retreat for a couple years. As everyone met up in Vienna, a little something called COVID-19 was starting to make headlines. It was only a matter of time before the pandemic spread around the globe, and as a result, future retreats were put on hold.

Though the pandemic is far from over, we have all been learning how to live with it, so earlier this year, the company decided it was finally time to have another retreat. Some 30 months after the last retreat, we all reconvened in Lisbon, Portugal. 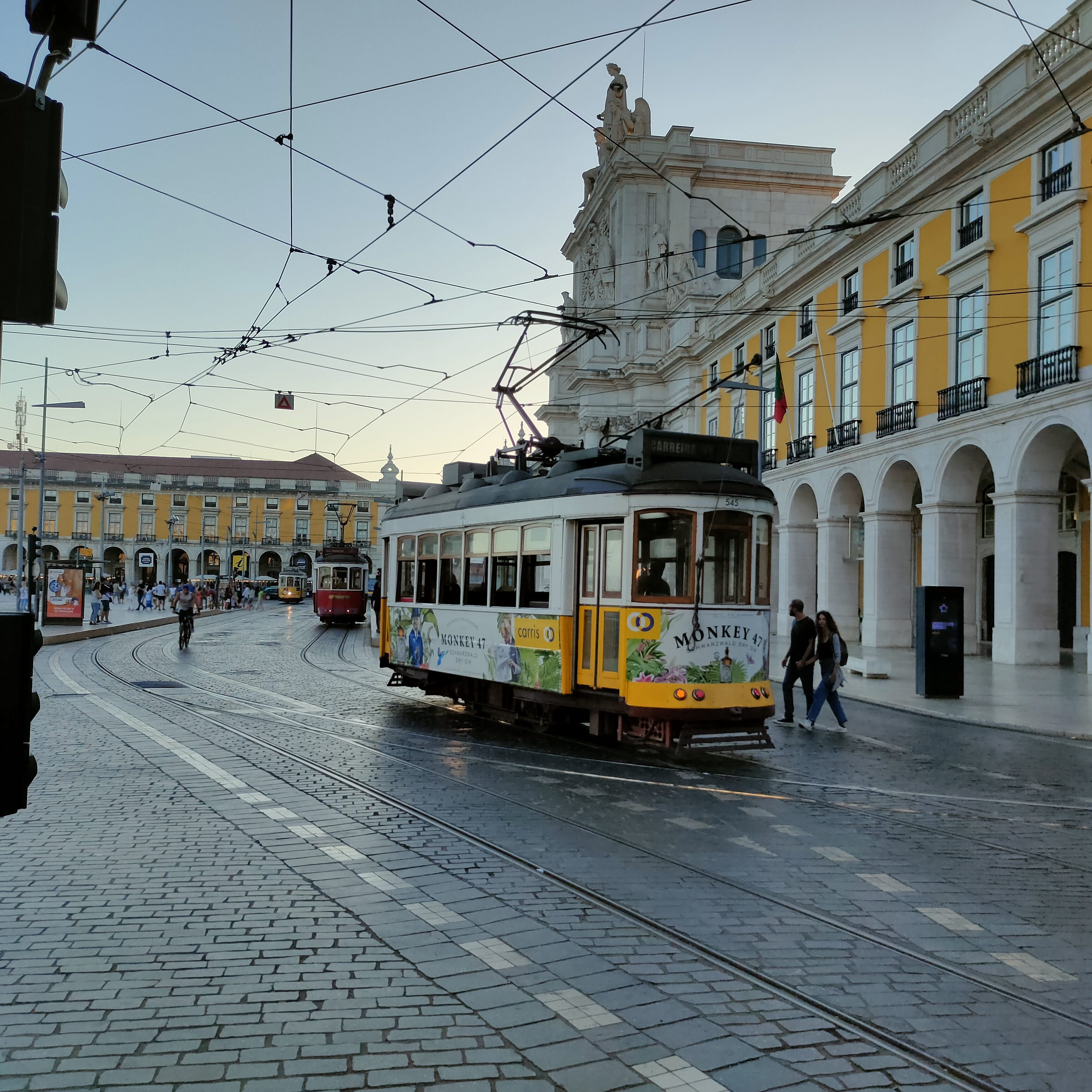 This retreat was different from previous retreats in a number of ways. For one, the regular cadence of retreats every six months had been broken. While some of us live in the same cities or have visited one another in the past couple years, many of us hadn’t seen — or met — our colleagues in all that time except via Zoom calls.

Not only that, but in early 2020, the company consisted of around 45 people. A few people have since left, but many more have joined. We then received an investment of 100 million euros, some of which went into creating and hiring new roles. And earlier this year, PSPDFKit acquired three companies (and all their employees). Practically overnight (or what felt like it anyway), we more than doubled in size.

This meant that now, instead of 50 people, there would be close to 100 of us. And although some might consider me one of the “old guard,” I still only personally knew maybe a quarter of the people at the company before heading to Portugal. So to say that, once again, I felt a little overwhelmed in the time leading up to the retreat would be an understatement.

Keeping Elements of a Successful Retreat

To date, PSPDFKit has held 12 retreats (including the most recent one), and we’ve successfully zeroed in on what works — and what doesn’t. So those planning the retreat kept this in mind and made certain to create a schedule that would allow people to have a mix of getting to know one another, sharing knowledge in and across teams, and better understanding the company’s goals and vision.

In my mind, a successful retreat is one that has enough time set aside for both working and socializing, and this retreat was no exception. In keeping with tradition, since it was a summer retreat, there was more of an emphasis on socializing and less on accomplishing a ton of work. This is partially due to the fact that there were so many new people; it was important to not only get to know one another, but also to understand what PSPDFKit does and make sure we’re all on the same (digital) page regarding where we’re heading.

A typical day had us meeting in the ballroom of our hotel at 9 a.m. for various presentations, such as learning about product organization, revisiting our core values, discussing security, taking part in a town hall, and the quarterly AMA. We also had team meetings and cross-team meetings throughout the week, as well as an entire morning spent doing team building activities. And in between, we had lunch breaks and blocks of time we could use to either catch up on work and handle support, chat with one another, or just take a break. 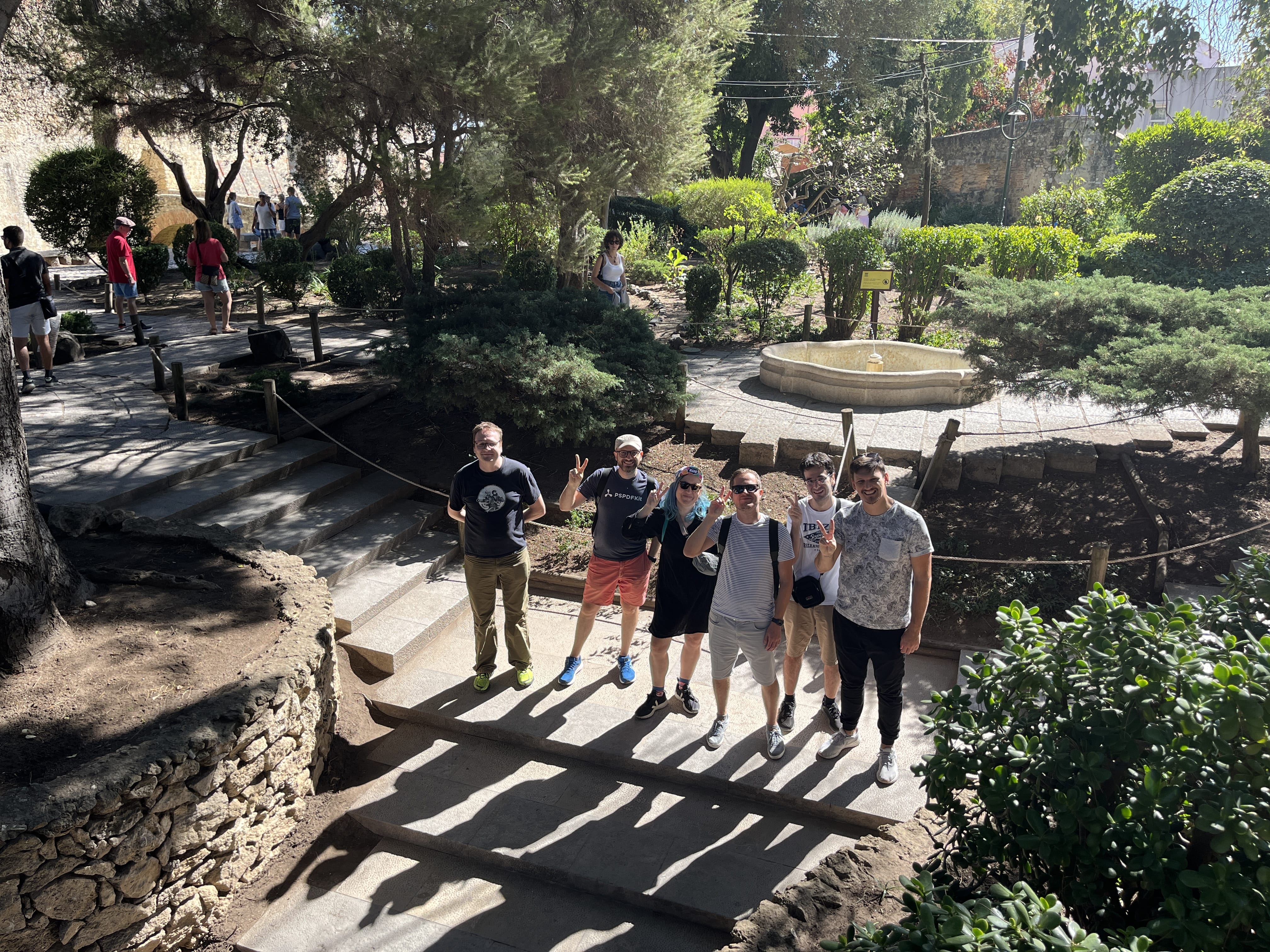 Most days, we were done with work around 5 p.m., and then we had the evenings free to do whatever we wanted — whether that meant participating in PSPDFKitrivia, hanging out at the rooftop pool, going to dinner in groups, heading out to catch a football match, or retiring early to rest up. Many of us also ended up congregating later in the hotel lobby, where there was a lounge with evening entertainment.

Additionally, we had a free day on Thursday, where we were encouraged to explore Lisbon with our colleagues. Some people went to Sintra, others to Cascais. Some people stuck close to the hotel and recharged or just leisurely walked around. My group of seven set out early on a trek to Castelo de São Jorge, followed by a ride in the iconic tram 28 across town, and ending with lunch at a hidden gem of a restaurant with traditional food and excellent service. That evening, a big group of people went on a private boat trip, and others still went to a music festival. 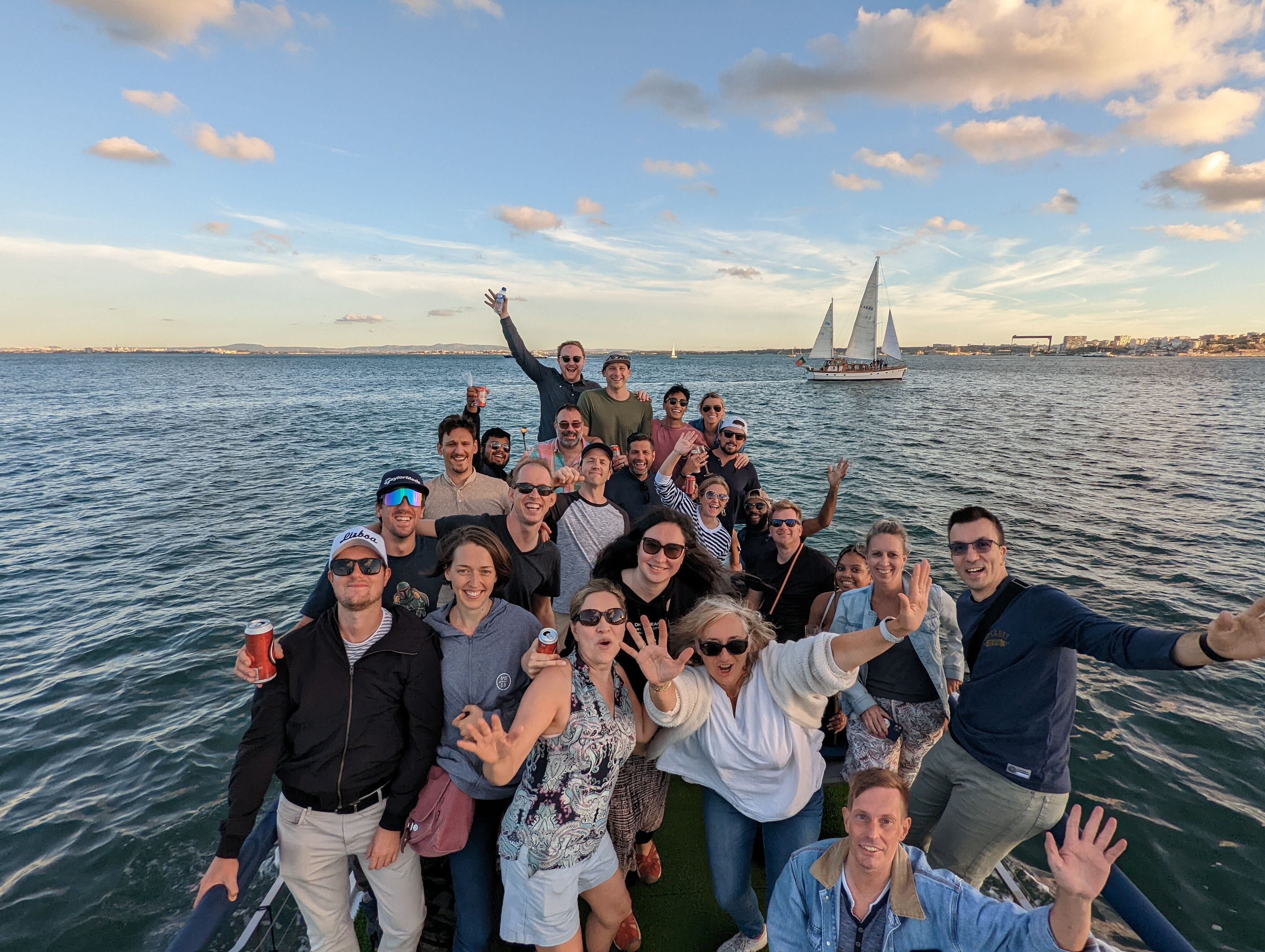 Compared to past retreats, which had more structured social activities, this time around, we had a lot of free time where we could decide what we wanted to do. It encouraged more organic conversations and allowed people to socialize as much — or as little — as they wanted (something I, an introvert, appreciate).

However, the reality of being part of a company of this size is that it was impossible to meet everyone. There are still many people I didn’t have a conversation with; I would have needed at least another week to get around to talking with everyone. And one of the biggest challenges was matching a person with their avatar and then remembering their name, their team/role, their country of residence, their country of birth, and more. It’s a lot easier when it’s someone you interact with regularly, but if you have little-to-no interaction in your day-to-day work, it’s much trickier. 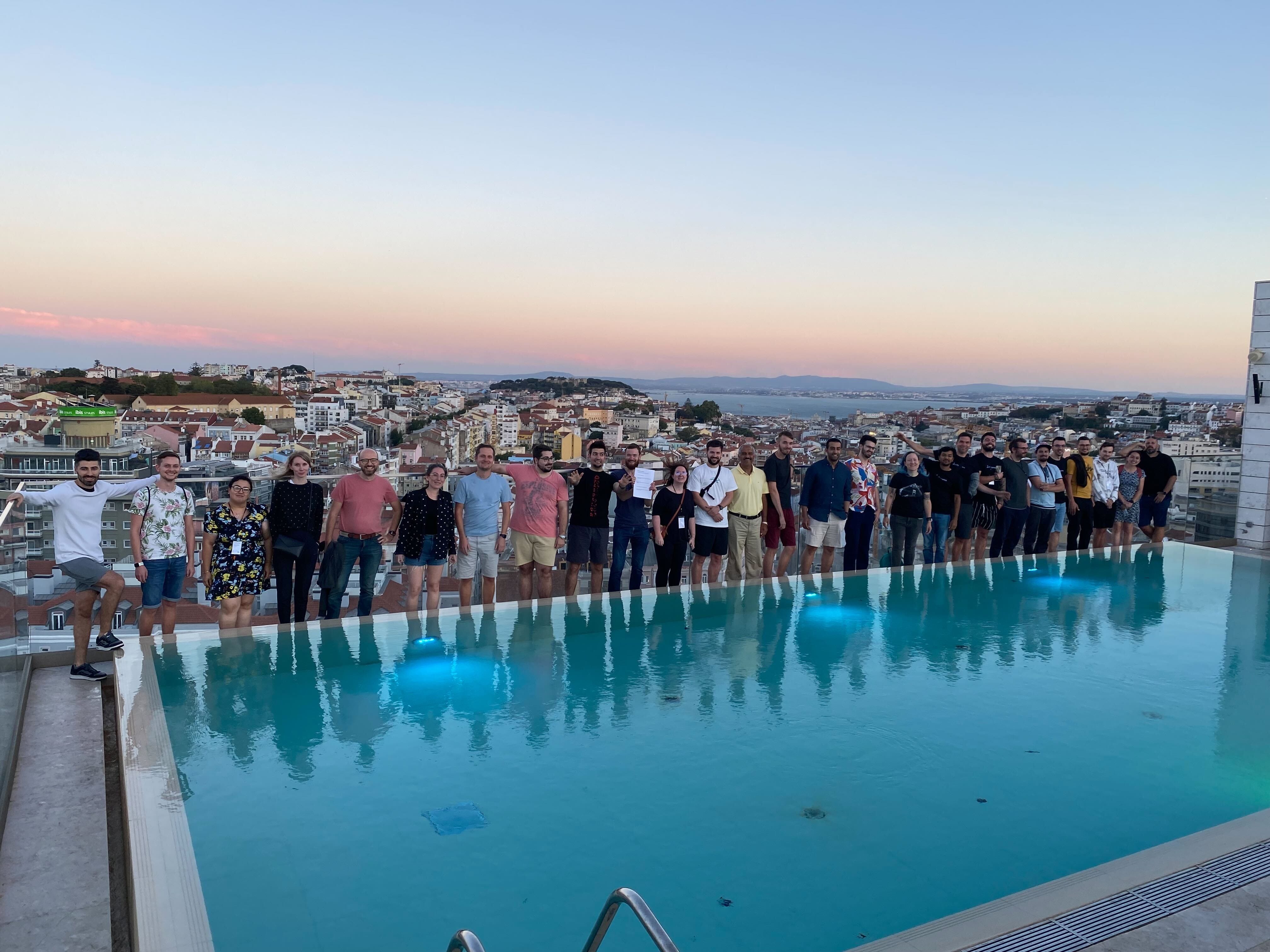 That said, there are many people I did meet, and — particularly for the people I work with closely — interacting in real life (seeing how they talk, inflect, carry themselves) provided me with so much more context and understanding of who they are, which will undoubtedly carry over into my work. Because PSPDFKit is a remote company that heavily relies on asynchronous communication, expressing oneself clearly is a super important skill to have, and it becomes much easier to do this when you know what the person you’re talking with is like.

While keeping a balanced schedule and prioritizing meeting and interacting are parts of every retreat, there are a few elements that were different to past retreats. For one, PSPDFKit is no longer a bootstrapped startup, and that means more official hierarchies needed to be put in place, which was apparent at this retreat. Additionally, due to the sheer number of people across so many teams, we had more high-level discussions than product-based ones. There was also more of a forward-thinking bent to the presentations and talks, as a way of communicating and aligning everyone on shared goals for the company.

Many companies like to claim they have a flat hierarchy, citing benefits like more autonomy, quicker decision making, and more transparency. And while there has always been a hierarchy in place at PSPDFKit, in the past, it was more for logistical purposes than anything else.

As we’ve grown, it’s been crucial to move away from this, because as a company grows and matures, so too must its structure. While flat hierarchies work for smaller companies and startups, the more people you bring on board, the harder flat hierarchies fail.

Over the course of the past year, PSPDFKit has expanded with the addition of more C-level roles and an HR department, and it has built out teams responsible for finances, sales, product, and operations. As a direct result of this, processes have been put into place to create a more visible hierarchical structure. This ensures everyone has a clear understanding of their role and what’s expected of them. 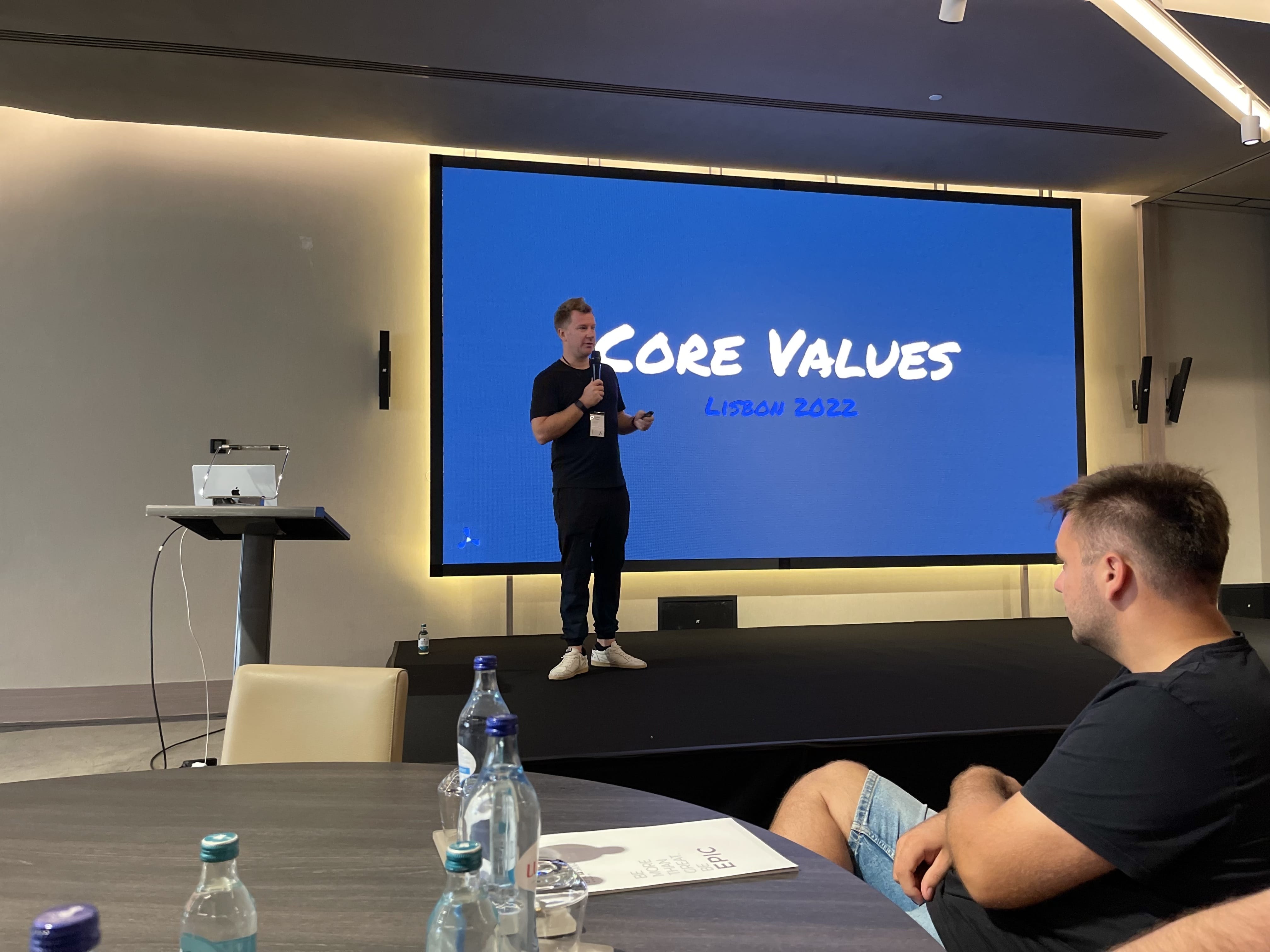 The downside of this is it can make people feel removed from leadership — and make leadership feel more removed from employees — which is why retreats are even more important. Official presentations give everyone more transparency into decision making, but it’s the free time that gives us the opportunity to talk to leadership about non-work things and get to know one another as people. During work hours, that hierarchy keeps things on track, but outside of work hours, while interacting at the retreat, we were able to connect without these formal structures in place.

To date, PSPDFKit has been successful at this separation of work and life. While the person up front giving a PowerPoint presentation on annual recurring revenue (ARR) happens to be the CFO, the next evening as we’re chatting over a drink, he’s just Chris from North Carolina who I’m comparing notes with about our experiences as Americans who live(d) in Germany.

In the past, retreats at PSPDFKit were very team-centric. This meant we had lots of meetings with our teams, where we brainstormed, planned, and worked together throughout the week. However, the mixing of teams only really happened outside of working hours. 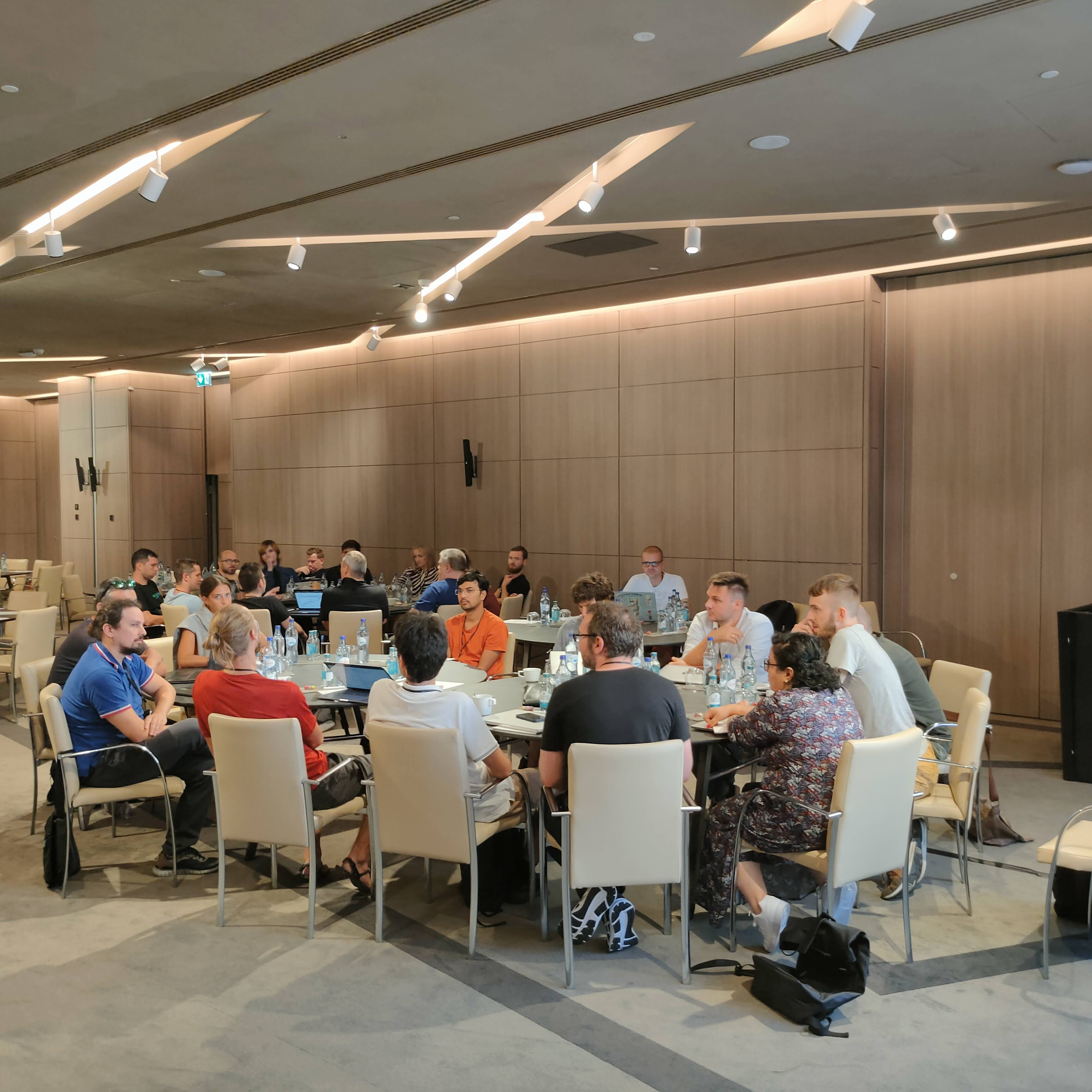 This time around, the schedule had a few team meetings, but the bulk of it was cross-team meetings: Sales and Marketing, Product and Engineering, Legal and HR, Marketing and Finance, Support and Product… the list goes on. Basically any permutation you could think of, we had. Some of these meetings had an official agenda with presenters, while others were informal discussions that gave us the opportunity to talk about the intersection of various teams’ work. 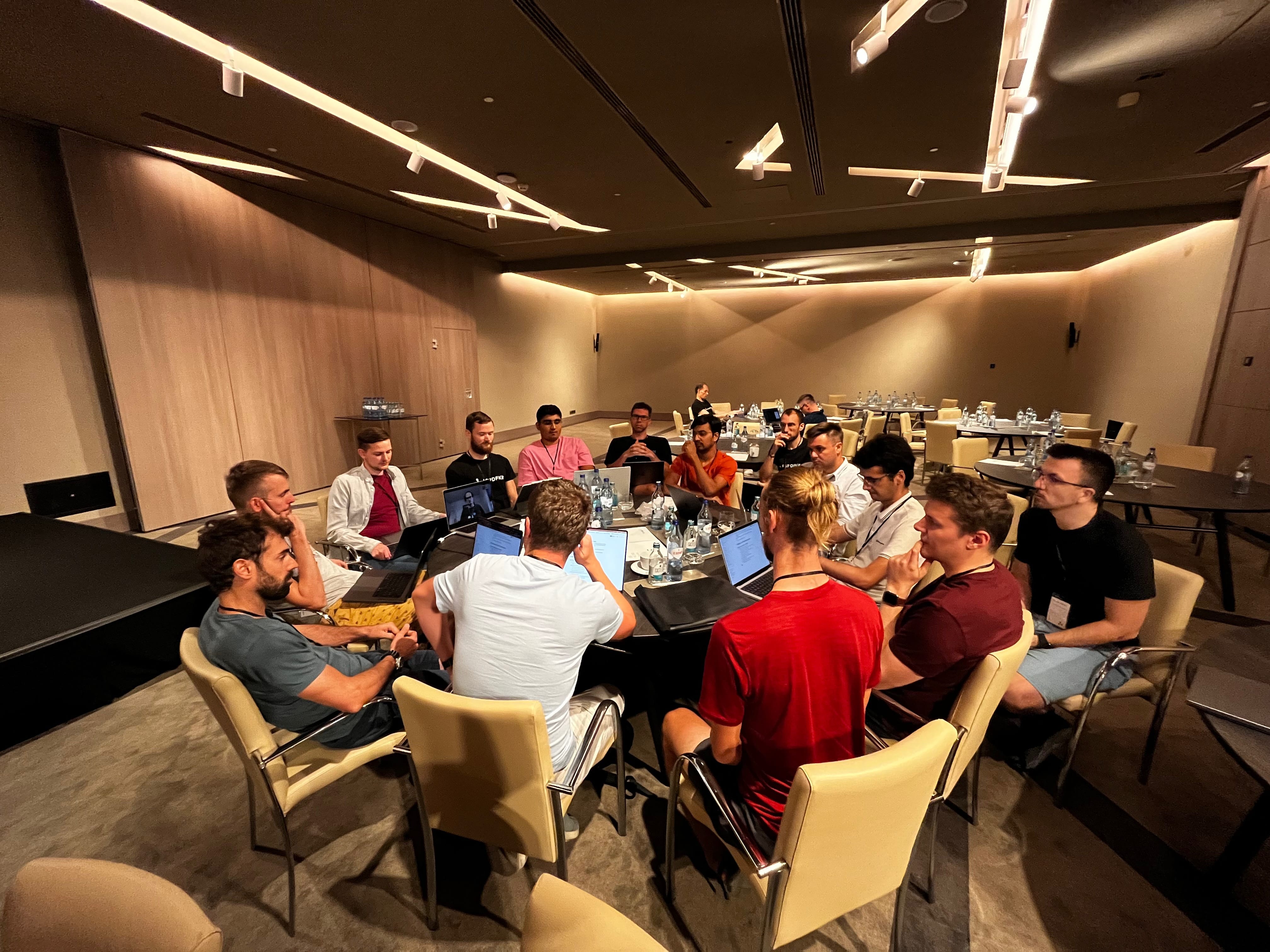 Another marked change was the way we approached strategy. Back when we were a group of 50 people, retreats were often used to discuss short-term strategy — at least enough to last until the next retreat six months down the line. However, in the past couple years, we’ve gotten better at strategizing, namely out of necessity. For one, having such a large gap between retreats forced us to do more remote planning. And then there’s the fact that we’ve grown up, and that means we need to have clearly defined roadmaps that specifically outline whys, whats, and whens. Instead of debating and ironing out the finer details of plans at retreats, we can instead use that time to talk about what’s already been established and ensure we’re aligned in our understanding. 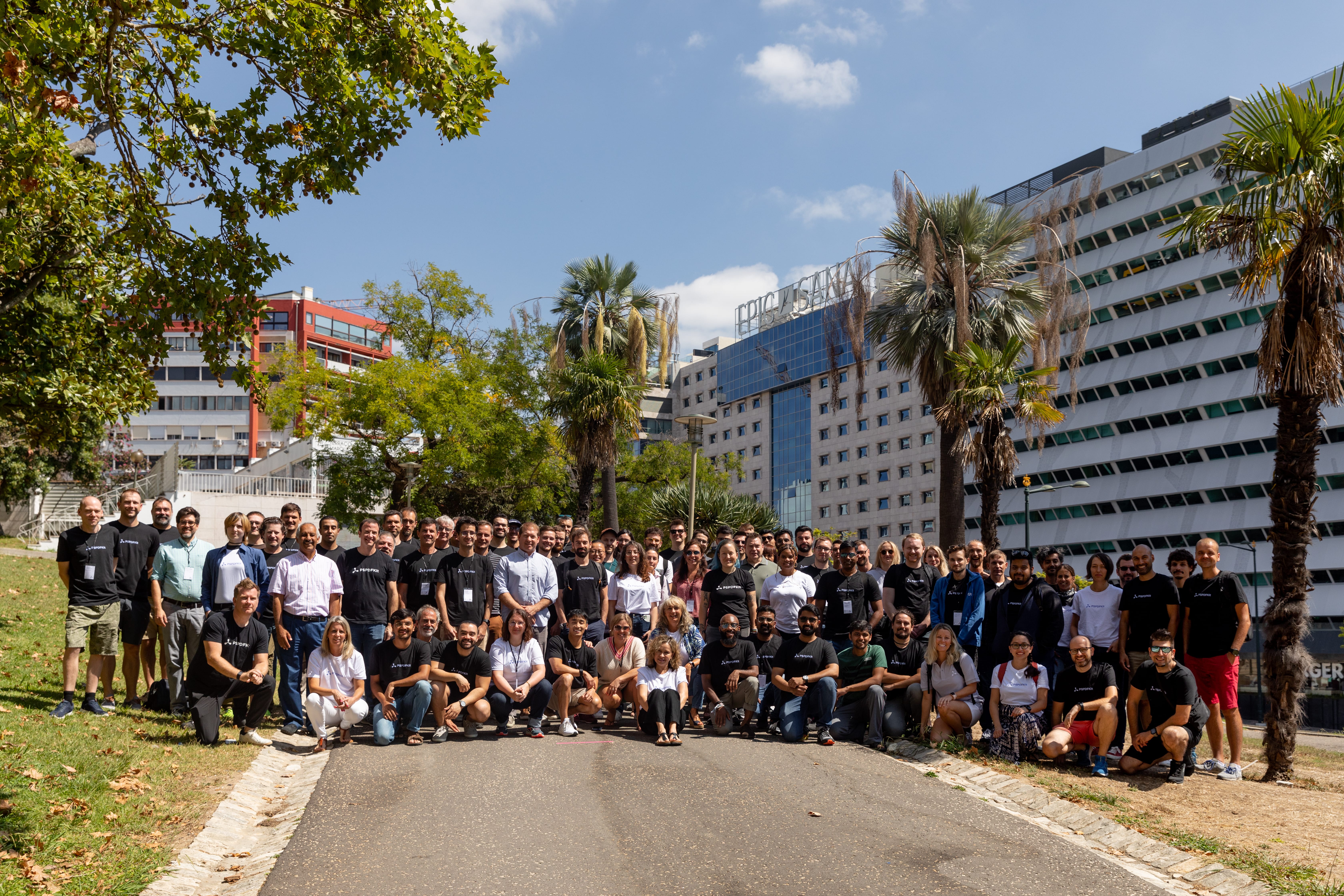 When looking back to that first retreat I attended, it’s easy to see how much has changed — and at the same time, how much hasn’t. PSPDFKit has grown in many ways: more people, more roles, more countries, more products, more structure, more process. It’s no longer the same company it was even just one year ago.

But at the same time, a lot has stayed the same: We still relate to our core values. We’re still committed to our customers. We’re still a group of people who are creative and smart, focused and driven, helpful and kind.

We can’t go back to the company we used to be, but that’s mostly a good thing. As the bestselling author John C. Maxwell once said, “Change is inevitable. Growth is optional.” And it’s true. That PSPDFKit has changed was indeed inevitable. But that we as people have grown — not only in literal numbers, but also in our mindset and way of doing things — was a conscious, deliberate choice, and it’s what sets us apart. 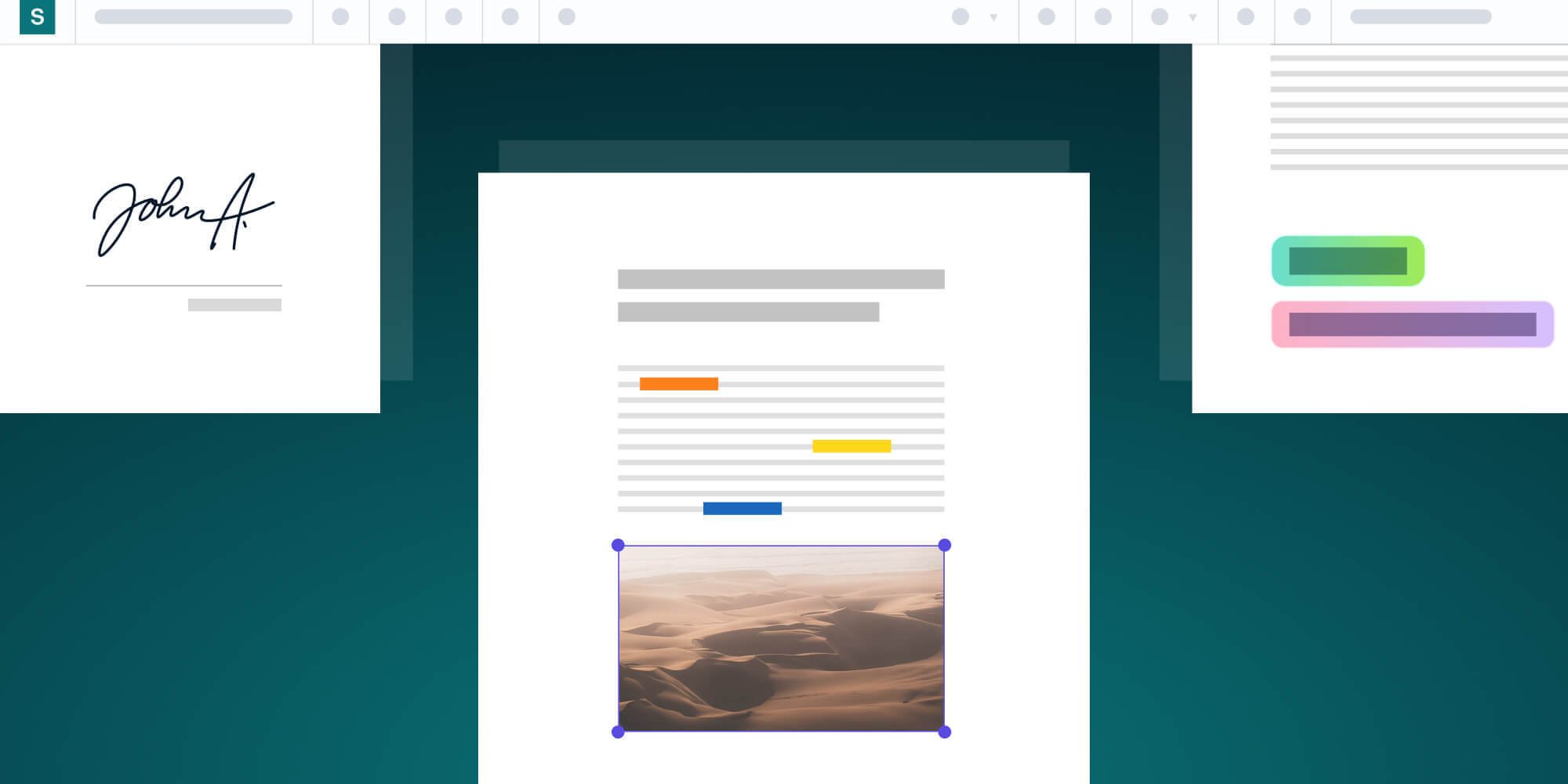 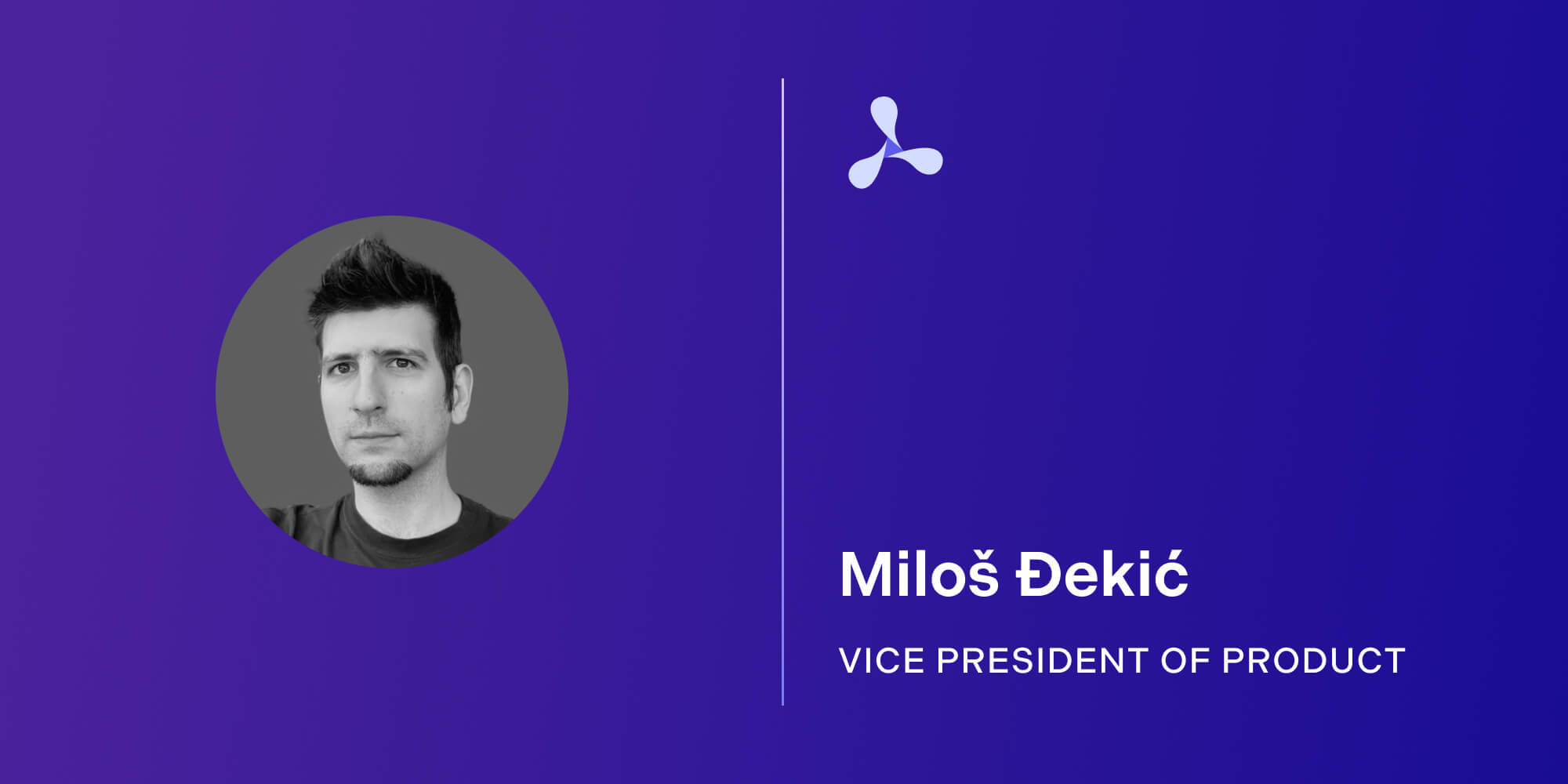 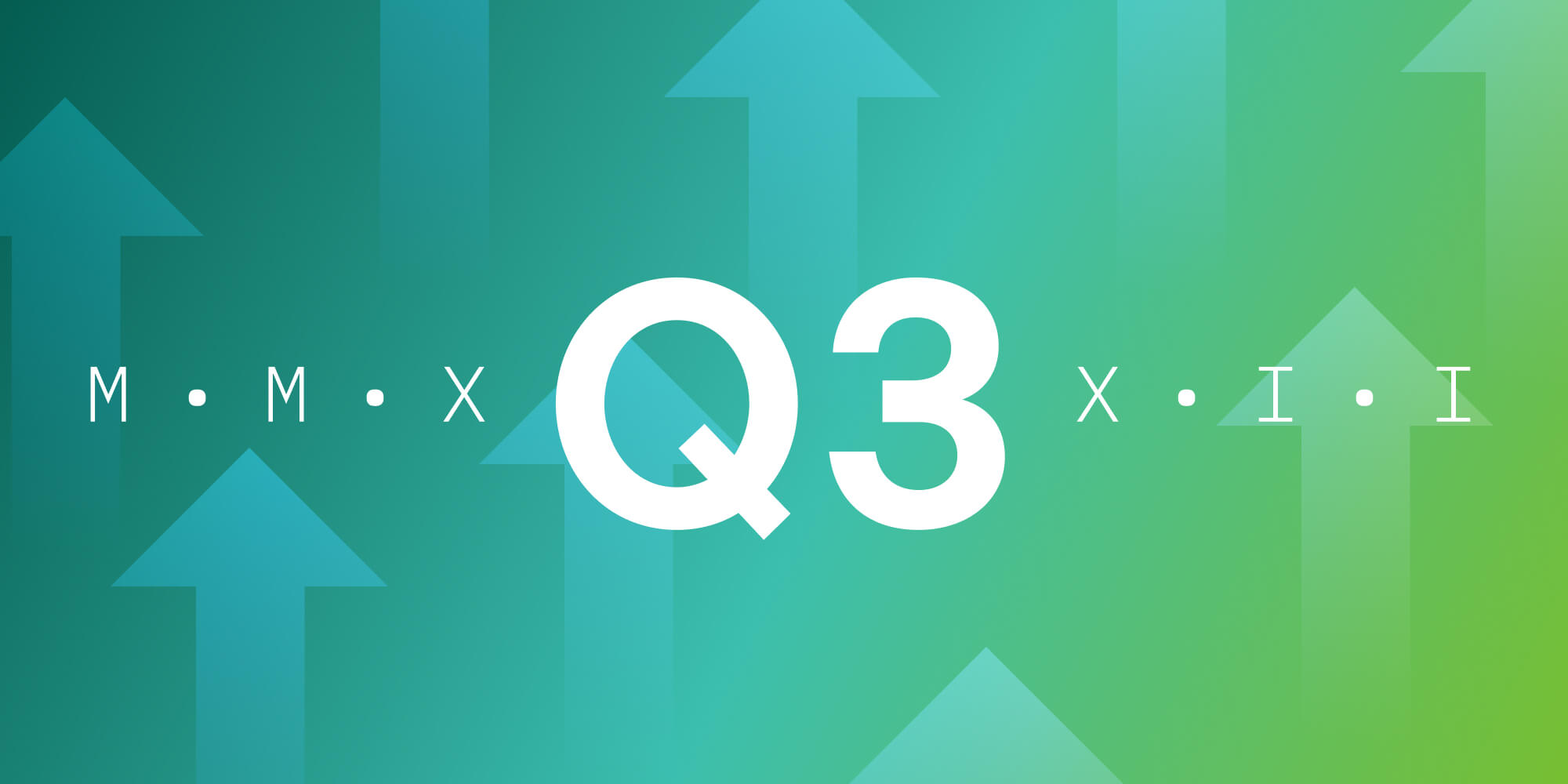