Last September, I had the opportunity to give a talk at ElixirConf.eu. This talk, entitled “The Perils of Large Files,” was a summary of our learnings working with large files on PSPDFKit Server and PSPDFKit Processor. This blog post is an adaptation of the talk’s contents, and its principles can be applied to any application written in Elixir and Erlang/OTP.

PDF files can range dramatically in size — from a small, 30 KB contract, to a 1 GB illustrated book, and more. Dealing with large files requires extra care. If mishandled, a single large file can quickly exhaust available resources, in turn causing:

In other words, availability is directly related to the way we manipulate large files.

In this blog post, we’ll focus primarily on memory-related issues.

To understand how to work with large files, we’ll explore three use cases:

For each use case, we’ll analyze an initial implementation, perform some measurements, and outline some mitigation strategies. The objective is not to offer one-size-fits-all solutions, but to show a methodical approach that can be used in similar situations.

Reading Files in a Cache Store

A common scenario with large files is a file system cache store: Given a parent directory, we want to mediate access to the files contained within. In this example, we’ll focus on reading files out of the cache store.

We can use a GenServer to model the cache store:

The design of this implementation isn’t optimal, as it imposes sequential access to files in the directory, but it’s a perfect example of what can go wrong when reading files from disk.

Let’s measure memory use when working with this cache store implementation: We’re going to use some built-in tools available in the Elixir and Erlang standard libraries, along with Recon, a package by Fred Hebert that provides a wide range of troubleshooting tools.

Results are expressed in bytes and show that after reading the file, our memory use grew roughly the same amount as the file size. The BEAM runtime uses a reference count mechanism for binary data larger than 64 bytes, so this delta implies that one or more processes are holding a reference to the contents of the file.

One could assume that as the test process reads the file contents, it’s the one holding a reference, but it’s always better to gather hard data.

We can update our test code to use :recon.bin_leak/1, which measures memory usage, triggers garbage collection, and returns a report that processes that released memory.

We’ll run :recon.bin_leak/1, reporting 10 processes that released memory (in descending order in respect to the number of references dropped). The Enum.filter/2 call will remove all processes different from our cache store from the result:

Rerunning the test, we obtain confirmation that our cache store held two references that were garbage collected:

These results may be a bit surprising at first, but there’s a valid explanation: Our cache store is under very little load, so it doesn’t trigger automatic garbage collection. This behavior can be observed in many applications that don’t have much traffic; while numbers may vary, in my experience, processes that receive a read request every two to three seconds can suffer from this problem.

There are different ways to mitigate this issue, the simplest one being changing the return value of handle_call/3 from {:reply, contents, base_path} to {:reply, contents, base_path, :hibernate}. By instructing the process to hibernate, the runtime triggers a garbage collection and releases all unneeded references. Hibernation comes at a (tiny) CPU cost when “waking up” the process (which happens automatically when it receives a new request).

A different approach could be to revise the cache store API: Instead of returning file contents, it could return the path of the file. Once the caller process has the path of the file, they can decide how to best interact with it. Note that this approach may lead to race conditions: What if the cache store deletes the file before the caller process can read it?

Calculating the SHA-256 of a File

Given a file path, we want to calculate the SHA-256 of its contents for verification purposes.

We can use the :crypto library included with Erlang/OTP:

Our implementation reads the file, hashes its contents, and then encodes the resulting SHA in Base32 so that it’s human readable and usable in data stores and URLs.

We can test resource usage of this function by:

The results show a memory jump roughly the same size of the file:

We can also see that garbage collection reclaims memory used, as we’d expect. As long as we perform hashing in a shortlived process, we don’t have to worry about memory leaks.

The issue in this implementation is around peak memory usage: The size of the file determines the total memory used. If we have 4 files that are 500 MB each, we’d need 2 GB of memory to hash them in parallel. For the test file, we can look at the memory profile inside the Observer application. 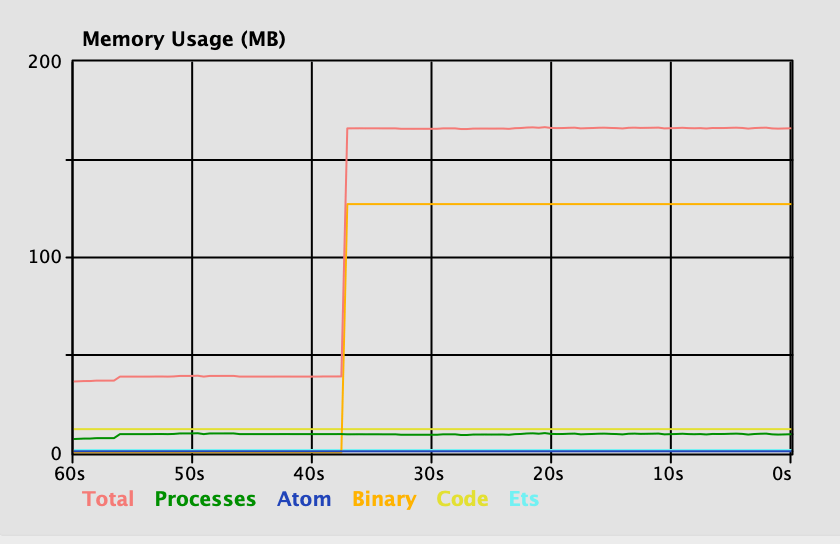 Memory rises sharply when calculating the SHA, and it’s retained until garbage collection.

We can improve peak memory usage by streaming the file instead of reading it all at once:

In the updated example code, we set up a File.stream!/3 at the specified path, which will lazily read 8 MB chunks at a time. We initialize a SHA-256 digest and then start consuming the file stream: For each chunk read, we update the digest. Once the stream finishes, we finalize the hash and encode it to Base32.

The performance profile for this version of the function is radically different:

We can see that, at most, we occupy around 8 MB, which is the maximum size of each file chunk. Looking at the observer graph, we can see a small spike and comparable execution times compared to the inefficient version. 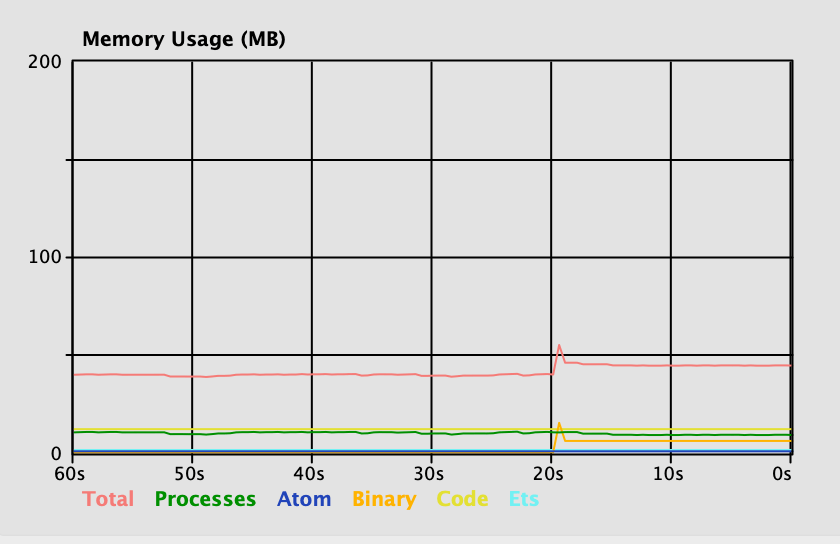 With this implementation, we improve our ability to produce hashes in parallel, which means we can do more with the same amount of total memory. It’s important to remember that as we can do more work, we’re likely to use more IO and CPU.

Fetching a Large File from a Remote Source

For this use case, we want to fetch a file from a remote HTTP endpoint and write it to a specified local file. There are several HTTP clients available in the Elixir ecosystem, but for this example, we’ll use :httpc, as it’s part of the Erlang/OTP standard library:

In the example code, we fetch a file from a URL, get the response body, and write it to a specified path. For the sake of keeping the example focused, we won’t do any error handling.

We can test this code using a file from one of our examples, a 12 MB PDF document:

Execution time is effectively bound to the network speed, but if we look at memory usage via the Observer, we see a spike: 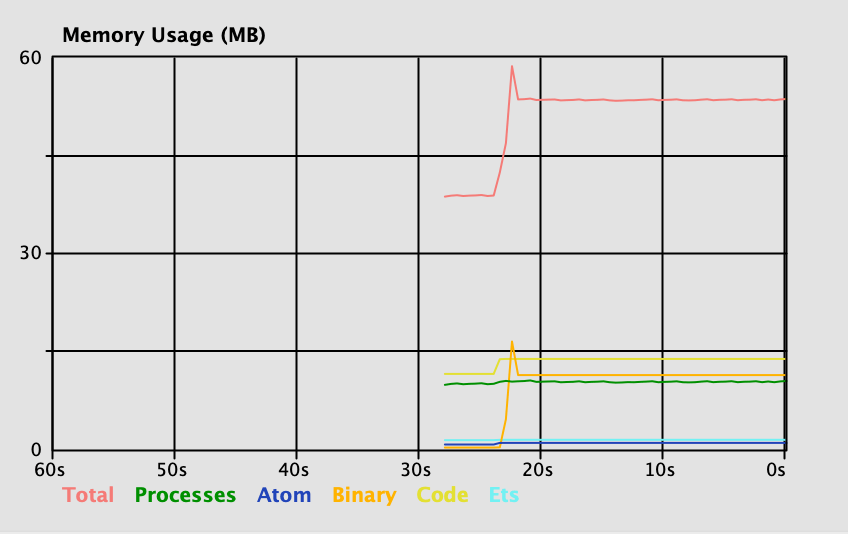 The memory usage delta maps roughly to the file size, plus some overhead most likely connected to handling the HTTP request. We can infer from this behavior that with this implementation, the ability to concurrently process multiple operations is directly related to the size of the file to fetch.

We can improve the implementation and achieve more deterministic memory use by streaming and writing the file without ever loading its entire contents in memory. While :httpc provides an option to stream directly to a specified path, it’s worth showing a more generic, message passing-based technique that can be used with a wider range of libraries.

We can then start processing response chunks in a loop:

Loops are structured so that:

This implementation has a larger number of moving parts, but its performance profile is radically better. 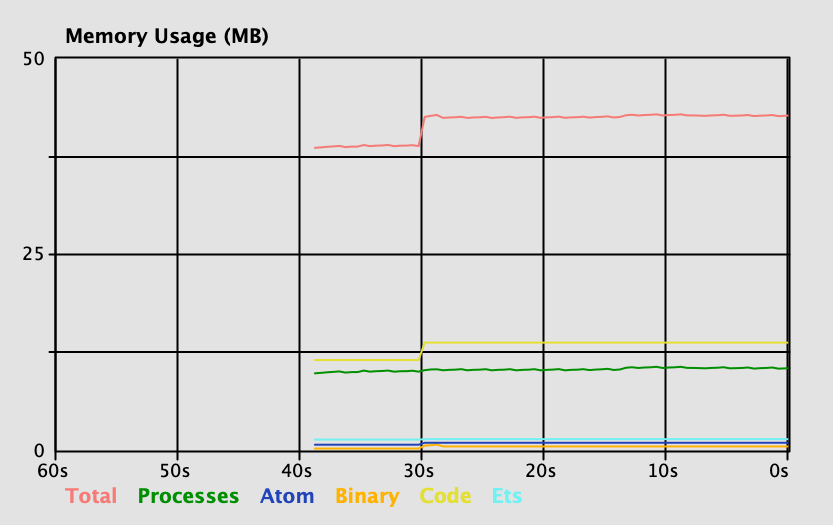 There are, however, some sharp corners we need to be mindful about.

We do, however, give up two guarantees:

There’s no silver bullet in software engineering, and the same goes for large file management, but we can extract some recommendations and provide some references:

These recommendations are fairly broad and can be used for use cases other than large files. I hope you’ll find a way to use them in your project.