PSPDFKit’s most important feature is fast PDF rendering. This post looks into how we measure performance when developing the framework and how we try to remove bottlenecks. We had an established way of doing this in the past (using the Time Profiler), but the new iOS 12 API Signposts provided us with a new way of performance tuning.

With iOS 12, Apple introduced os_signpost. Instead of focusing on efficient logging, like os_log does, the sole purpose of os_signposts is to collect performance data for visualization. It allows you to place markers that show up in instrumentation to better discern where a bottleneck could be. In particular, there are two ways to use os_signposts: They can be used to mark periods of time (intervals) or single points in time (events). These signposts can span processes or be limited to a single process or even a single thread. Signpost Intervals are particularly useful for measuring a specific block of code that is causing a slowdown.

At PSPDFKit, we have an increasingly complex architecture. With a lot of APIs offering different methods of customization, we always try to fail early using asserts if a method receives data that is unexpected. Let’s look at a concrete example below.

PSPDFTextSelectionView handles the selection of text on a particular page of a PDF. It has an API to specify the glyphs to be selected. The number of glyphs selected could vary from the tens to the thousands, depending on the PDF. Additionally, this method can be called several times a second, as it is used as a part of responding to touches from the user:

PSPDFAssertEnumerable goes through the passed-in NSFastEnumeration conformant object and ensures that all its elements are of the same expected class. This allows us to fail early when a user of our framework mistakenly passes in something we do not expect, as opposed to crashing later on due to an unrecognized selector exception. This sort of check is only required in Objective-C, as the collection classes make no guarantees about the types of their elements, in spite of lightweight generics.

After testing, we found that the text selection was not as performant as we’d like it to be. There seemed to be an almost unnoticeable lag when selecting small portions of text, but the lag would grow along with the amount of text we selected.

Typically, the next step after finding a performance problem is to measure the slowdown and determine where it occurs. For this, I usually start up the Time Profiler. But now we can use Signposts to mark specific intervals in our code and then look at them in Instruments.

In the text selection view, all the block detection work is performed by -setSelectedGlyphs:, and since this method was recently refactored, I wanted to see if we were hitting any unforeseen bottlenecks. Converting a bunch of frames on the screen into discernible text blocks is not a quick operation, so the speedup, if any, was not going to come from the block detection, which was already pretty well optimized.

To find the bottlenecks, we used the Signpost Intervals API and measured how long certain method calls took. For the purposes of this post, we are only interested in optimizing the preamble of this method. Note that if your deployment target is less than iOS 12.0, you will need to enclose the os_signpost calls in an if (@available (iOS 12.0, *) {} block (if #available(iOS 12.0, *) {} in Swift):

We needed to use the special %{public}<format specifier> format string to ensure that the log actually displayed the information required to force the logging system to display dynamic strings. From Apple’s documentation on os_log:

The unified logging system considers dynamic strings and complex dynamic objects to be private, and does not collect them automatically. To ensure the privacy of users, it is recommended that log messages consist strictly of static strings and numbers. In situations where it is necessary to capture a dynamic string, you may explicitly declare the string public using the keyword public. For example, %{public}s.

The os_signpost_id_t passed in to the os_signpost_interval allows Instruments to distinguish between multiple overlapping intervals with the same log and interval names. While not strictly necessary in the above instance, it is always a good idea to use this in case the implementation changes in the future.

To view Signposts data in Instruments, we first needed to start a Profile run from Xcode. Then, on the instrument selection page, we selected Blank Instrument. Next, in the top right of the window, we clicked the + button and selected the os_signpost instrument. 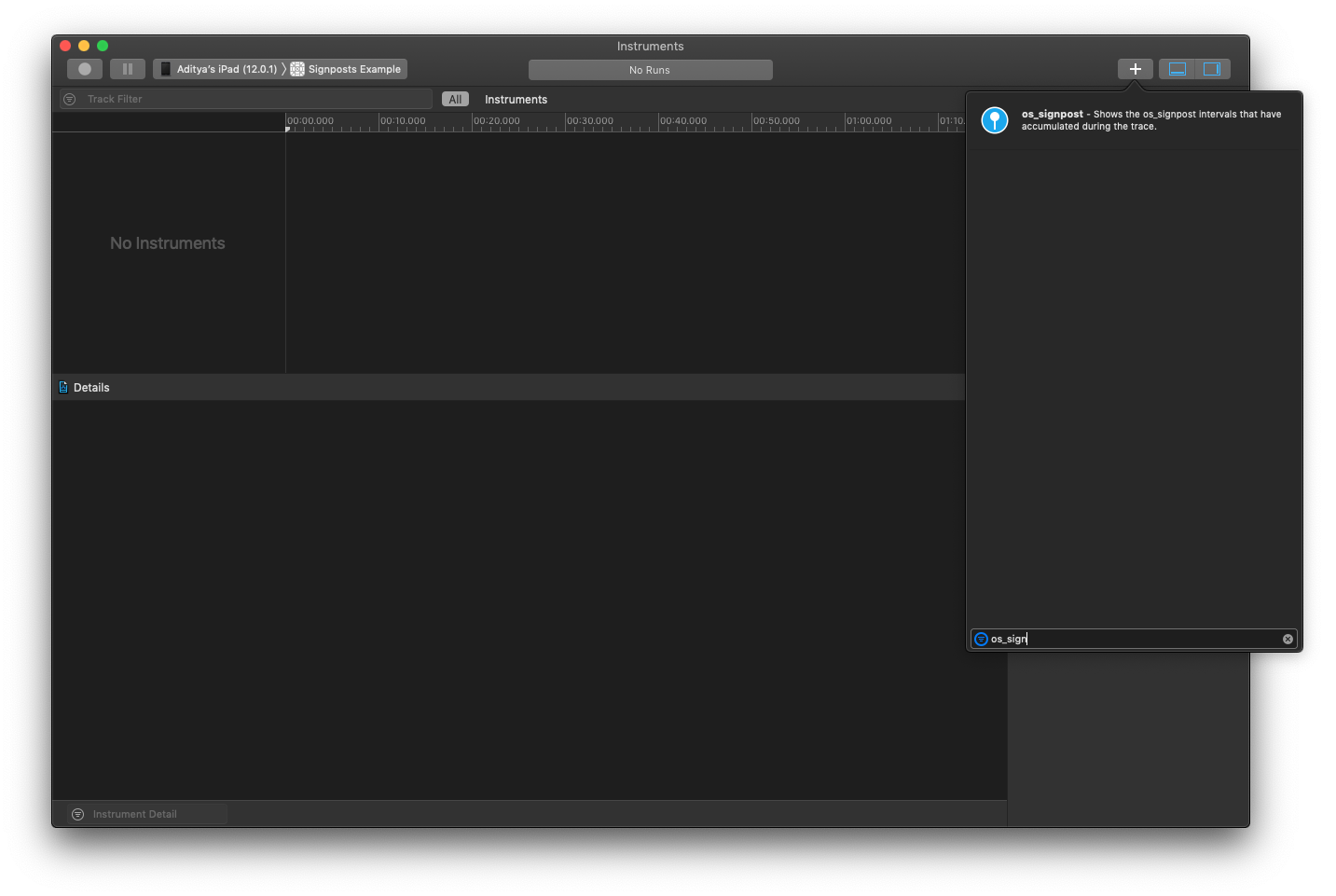 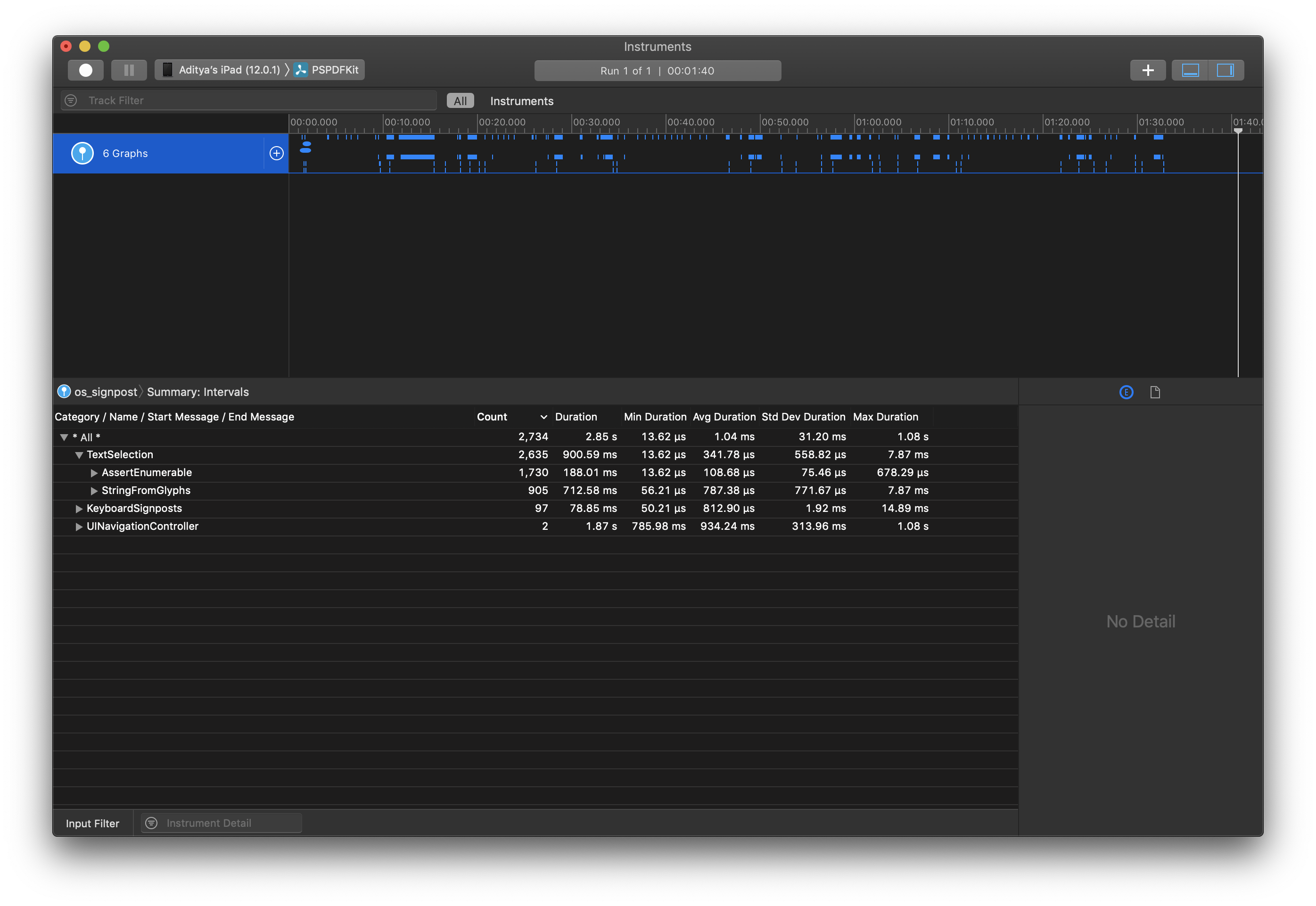 In the results (under TextSelection), it’s fairly obvious how heavy these calls were. While the average time spent executing is only 108µs for PSPDFAssertEnumerable, and 787.58µs for PSPDFStringFromGlyphs, this time balloons when the number of selected glyphs is large: With 3,500 glyphs selected, AssertEnumerable can take up to 3.5ms! On a 120fps screen, where you only have about 6ms to finish your work on the main thread before causing stutters, this is an especially inordinate amount of time. Since this method is called a lot from PSPDFTextSelectionView’s touch handling code, there is no need for us to iterate through the entire array every time it’s called internally. We therefore added a variant of setSelectedGlyphs: without the PSPDFAssertEnumerable check.

This method accepts an NSArray<PSPDFFGlyph *> and appends the characters in each glyph to form a string. The first obvious method to speed this up is to use +[NSMutableString stringWithCapacity:] to avoid repeated allocations. While this did speed things up, the root of the problem still lingered: We had an O(n) method where n could get pretty large. This is in line with our findings from testing, where the lag would get longer the more text you selected.

To fix this properly, we’d like to remove the need to call PSPDFStringFromGlyphs completely. On reviewing the code, we found that it was not necessary for us to compute the selected text as a string at that point in time. While we’d need to make some API changes, the performance gain from removing this call would make it worth it.

While our example above was rather simplistic and only really measured single method/function calls, Signposts can be used for much more. Since Signpost Intervals can be used across threads, it becomes easier to measure the performance of multi-threaded workloads. While not a replacement for the Time Profiler, if you’re already aware of the general area you’d like to measure, the os_signposts instrument allows for a less noisy environment in which to get performance data. At PSPDFKit, we’re very pleased with the os_signpost API, and we are confident it’s a great addition to every developer’s toolkit.