In order to seamlessly integrate PSPDFKit into your application, you will likely want to adjust some of the appearance settings of the framework UI elements. PSPDFKit was designed to be very flexible in this regard and offers a wide variety of appearance-centric properties and customization hooks.

PSPDFKit conforms to the standard UIView tintColor inheritance scheme and will automatically adopt your application’s global tint color. You can set the desired PSPDFKit tintColor by setting the tintColor property on your current window or on any other common superview of PSPDFKit view components. You are also free to set the tintColor property on any of the PSPDFKit UIView subclasses, either by setting the instance property directly or by using the UIAppearance protocol.

PSPDFKit was designed with a view controller-based status bar appearance in mind. In order to get the correct status bar appearance and behaviors for PSPDFKit view controllers, ensure the UIViewControllerBasedStatusBarAppearance flag in your app’s Info.plist is set. (This is the default behavior, but some old products might have set this to NO. In that case, you first need to update your application.)

The recommended and easiest way to style PSPDFKit to your liking is using the UIAppearance protocol. PSPDFKit instance properties that were designed to be used with UIAppearance are marked with the standard UI_APPEARANCE_SELECTOR qualifier.

Two of the most likely candidates for appearance customization are UINavigationBar and UIToolbar. If you are already setting the appearance of either one using UIAppearance selectors in your app, PSPDFKit will inherit these settings.

On iOS 13 and above, customizing the bar appearance (including the background color) needs to be done using the UIBarAppearance API instead of the legacy customization API. This applies to navigation bars, the scrubber bar (both floating and docked), and all the toolbars. You can set the bar appearance using the standardAppearance and compactAppearance properties on UINavigationBar, ScrubberBar, and Toolbar (the superclass of AnnotationToolbar, PDFDocumentEditorToolbar, and FreeTextAccessoryView, respectively). 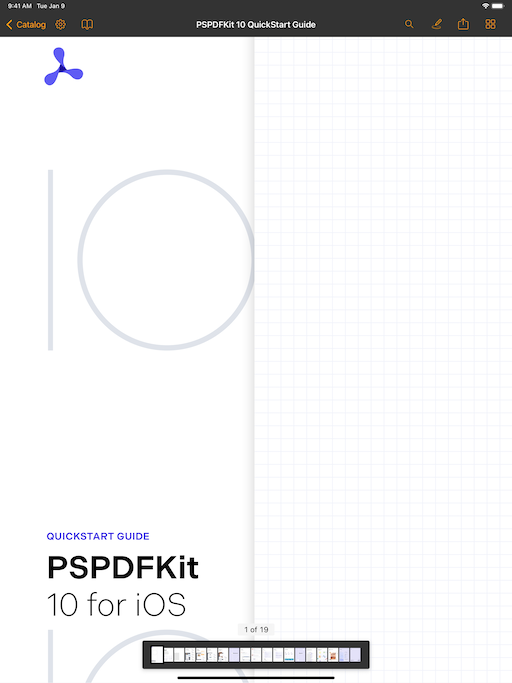 By default, the UINavigationBar and UIToolbar instances contained in a PDFNavigationController presented as a popover are reset to their default iOS appearances by PSPDFKit. This ensures that the bars seamlessly blend with the default popover background view. 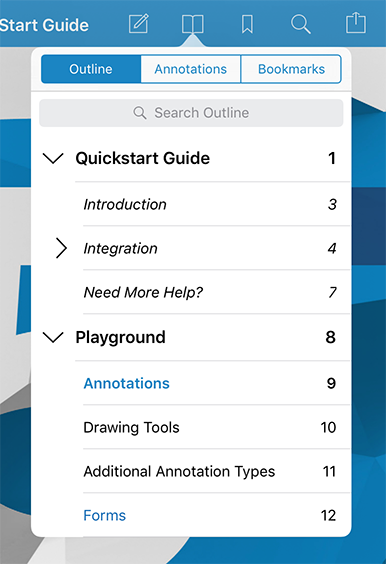 AnnotationToolbar (and its superclass, FlexibleToolbar) will attempt to automatically set its appearance parameters to match those of the UINavigationBar of the UINavigationController in which it is currently being displayed. In case these parameters aren’t appropriate, or if further customization is required, you can use the appearance properties defined in FlexibleToolbar to adjust the toolbar styling (using the UIAppearance protocol or setting the property values directly).

The following is an example illustrating how to customize just the annotation toolbar appearance (changing it from the default inferred appearance). You can customize the scrubber bar exactly the same way by changing AnnotationToolbar to ScrubberBar on the first line:

However, the selected style for the buttons added to an annotation bar can be further customizied by adding the following:

An alternative to using the UIAppearance proxy is to set the properties on the object directly: