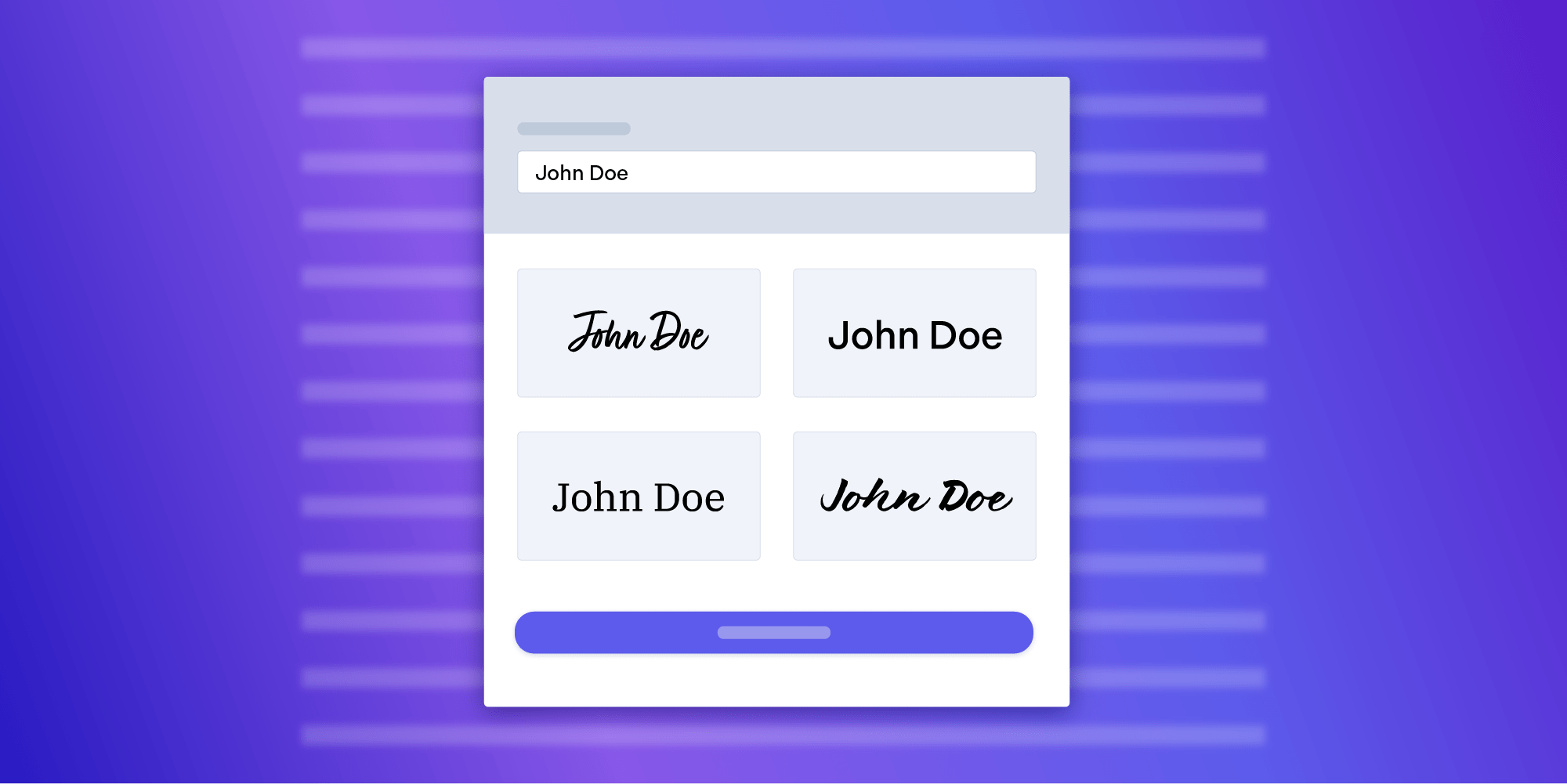 A common workflow for PDF documents is to present users with a form that contains a field that, once clicked, allows users to draw a signature that’s then added to a document. An example of this on PSPDFKit for Web can be seen in the Form example of our Catalog.

In this post, we’ll cover how to implement a different workflow that achieves the same result. What about if, instead of making users draw a signature, we allow them to type their names into a text input and we generate a signature based on that?

Even though this isn’t the standard workflow provided by PSPDFKit for Web, implementing something like this is a straightforward process.

You can go ahead and try out the complete example by following this CodeSandbox link. You’ll need to replace the "YOUR_LICENSE_KEY" string with a trial license key that you can obtain by following this link. Once you add it and refresh the CodeSandbox preview, the error message will disappear and the example will run.

The first step is to add an annotations.press event handler, which adds our custom logic when signature fields are pressed by the user.

Based on the steps outlined in the Override Ink Signature Dialog entry in the Knowledge Base, event.preventDefault() is used to avoid showing the default ink signature workflow when clicking on a widget annotation, and in the case of signature form fields, we render the signing modal instead:

Rendering Our Own Signing Modal

For this example, we’ll be using React to render our modal. For accessibility, we’re appending the inert attribute to the PSPDFKit container to avoid making it interactive or reachable in any way while the modal is open. Since support for inert is still lacking, we include a polyfill script for it:

The SigningDialog React component receives the onClose and onSelect callbacks as props. onSelect will be invoked once the user confirms one of the available options from this dialog. Regardless of whether the user makes a selection or discards the whole process, onClose will be invoked to close the dialog:

The only piece of state we need for our component is the name value the user wants to use for the signature. When the component is mounted, we focus on the input, as it’s the first focusable element, and placing focus on the first focusable element is recommended by the WAI-ARIA Authoring Practices 1.1. Then we set up the logic for closing the dialog when the Escape key is pressed.

Let’s take a look at the rendered UI:

I’m relying on web safe fonts to avoid complicating the example with custom fonts, but the options are endless! For each available font, a preview is rendered inside a button to confirm the selection.

Generating an Image from the Signature

The magic happens inside generateImage, which takes the name value and the selected font. It generates an image and passes it on a call to the onSelect callback prop:

If available, OffscreenCanvas is preferred, as it minimizes work on the main thread. As a fallback, a regular HTML5 Canvas is used instead. For our use case, the main difference between OffscreenCanvas and Canvas is their individual APIs for converting the rendered bitmap into a Blob. I’m abstracting these APIs away into a common convertToBlob async function.

The height and width occupied by the text is measured using the measureText method, and the canvas is resized based on that. Finally, onSelect is called with the generated PNG image blob.

Please be aware that the TextMetrics API is not fully supported on Internet Explorer 11, but it has good support on modern browsers.

Thus far, we’ve seen how to generate a PNG with the text we want to sign with. Now we need to create an image annotation from it.

And that’s it! We’re now letting a user type their name, and we generate an image out of it.

However, there’s a minor detail we can improve upon.

That’s easily done by changing the noView flag of the widget annotation. So we’ll do this while we generate the annotation from the blob, as we saw earlier:

And that’s it! Thank you for following along with this example of implementing a custom flow for adding signatures to a document. As we’ve seen, we can make use of native Web APIs to bring our own interactions and opt out of the default ones. This is just one of the many possibilities enabled by the flexibility of PSPDFKit for Web. The full example is available at this CodeSandbox link.